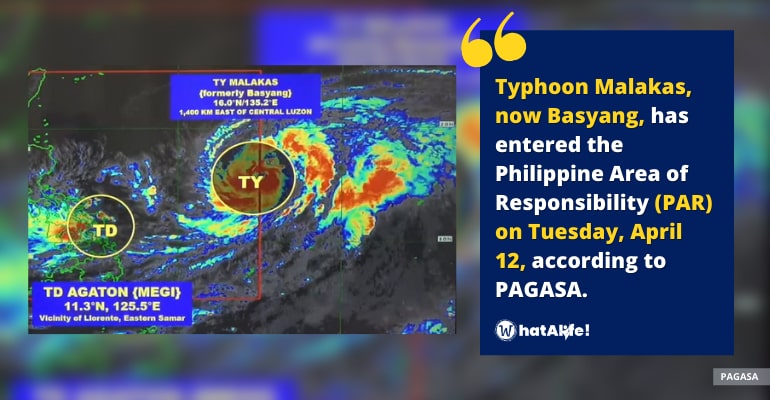 Typhoon Malakas entered the Philippine area of responsibility on Tuesday, April 12, according to the Philippine Atmospheric, Geophysical, and Astronomical Services Administration (PAGASA).

PAGASA stated in its initial report that it arrived at PAR at 10 a.m. Tuesday, April 12.  It was also given the local name “Basyang.”

Basyang was located 1,435 kilometers east of Southern Luzon, heading north northwest at 20 kilometers per hour (km/h), according to a report issued shortly before noon on Tuesday by PAGASA.

Basyang is predicted to stay near the PAR boundary, hence it will have a little direct impact on weather in the Philippines. Its stay within PAR will be brief as well, and it might leave on Tuesday evening.

The following areas remained under Tropical Cyclone Wind Signal No. 1:

In regions covered by TCWS No. 1, strong winds are expected. The winds from Agaton, on the other hand, pose a “minimal to a minor threat to life and property,” according to PAGASA.

Meanwhile, PAGASA’s rain forecast for Agaton stayed the same for the rest of Tuesday. The Weather Bureau warned the public to be prepared for further floods and landslides.

Moderate to heavy rain, with at times intense rain

Light to moderate rainfall, with some strong downpours

According to PAGASA, starting Tuesday evening or Wednesday morning, the tropical depression could turn east southeast toward the Philippine Sea.