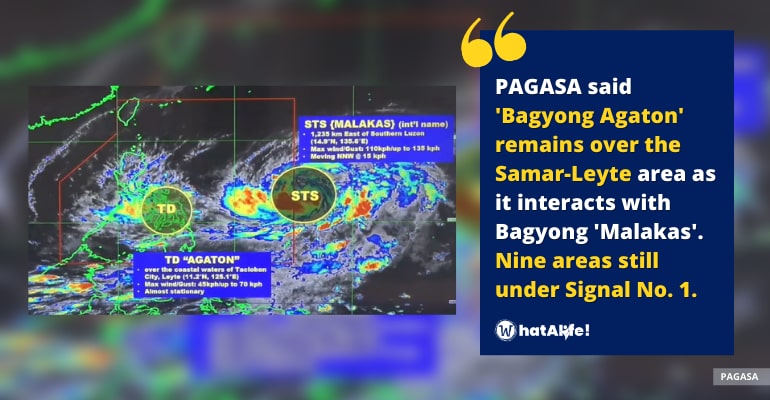 WEATHER UPDATE: The state weather bureau PAGASA said in its 5:00 a.m. update on Tuesday, April 12, 2022 that ‘Bagyong Agaton’ (Megi) remains to meander over the Samar-Leyte area as it interacts with Bagyong ‘Malakas’.

At 4:00 am today, the center of ‘Bagyong Agaton’ was predicted, based on all available data, across the coastal waters of Tacloban City, Leyte.

The central pressure of Tropical Depression ‘Agaton’ is 1000 hPa, with a maximum wind speed of 45 km/h in the center, and gustiness of up to 70 km/h.

TCW Signal No.1 is spread over the following regions (Strong winds prevailing or expected within the next 36 hours):

Over MIMAROPA, Dinagat Islands, Zamboanga del Norte, Quezon, and the rest of Visayas, light to moderate rainfall are expected.

Flooding and rain-induced landslides are still expected under these conditions and with heavy antecedent rainfall, especially in locations that are highly or very highly susceptible to these hazards as identified in hazard maps.

In any of the places where Signal No. 1 has been in effect, strong winds are expected.

Rough seas will prevail along the coasts of the areas affected by Signal No. 1, posing a danger to most seacrafts.