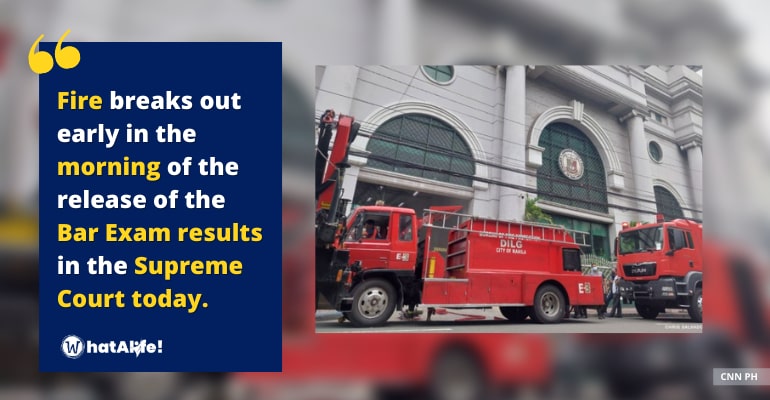 MANILA, PHILIPPINES — A room in the Supreme Court building caught fire early in the morning ahead of the release of the Bar Exam results, which were set to be released today, April 12, 2022.

Fortunately, release of results still went ahead as scheduled. The official twitter account of the Supreme Court posted an update by 7:30 AM.

Preparations are in full swing for the release of the results of the Bar Exams today as scheduled. It will proceed despite the fire incident this morning. #Bar2020_21 #BestBarEver2020_21 pic.twitter.com/gM4Yu8o4Pm

The fire at the Judiciary Data Center Room on the ground floor of the Supreme Court did not hinder the announcement of the Bar results, as assured by Supreme Court magistrate Marvic Leonen, head of the Bar Exams committee for the 2020-2021 batch.

This will NOT affect the release of the results of the bar. We have secured the data files and our chambers and OBC are fully operational.

As has characterized our operations, we have preparations for every contingency.

The fire started out around 6:00 a.m. at the SC’s Centennial Building at the corner of Padre Faura Street and Taft Avenue, according to a report by Manny Vargas on Dobol B TV.

The first alarm was raised by the Bureau of Fire Protection.

The sound of an explosion was followed by the smell of burned wire, according to the witness.

Firefighters from the Manila Fire Department and volunteers rushed to the scene to prevent the fire.

The fire has been controlled, according to the BFP.

SC spokesperson Brian Hosaka, citing BFP,  said the fire broke out after a power supply apparatus sparked in SC’s Data Center located in the Centennial Building. This also resulted in the official Supreme Court website to be down amid the exciting day of the release of the bar exam results.  – WhatALife!