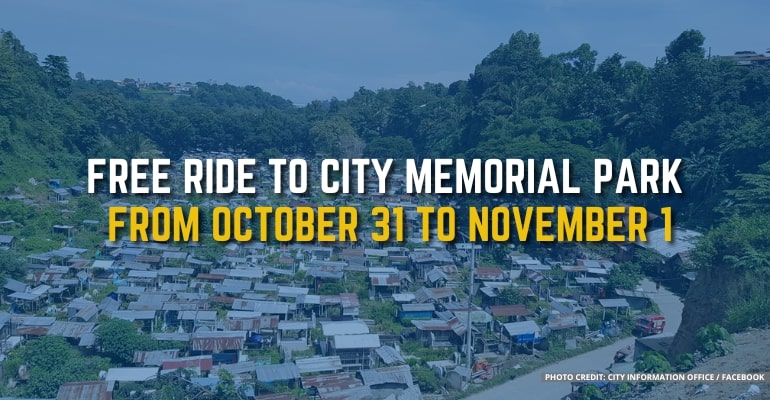 CAGAYAN DE ORO CITY, PHILIPPINES — For the convenience of those who want to visit the City Memorial Park or the former Bolonsiri cemetery, the local government will offer a free ride to the cemetery.

The free ride to the City Memorial park will start on October 31 and November 1 and is available for senior citizens, children, PWDs, and others.

The city has already announced that private and public cemeteries are open for those who visit their loved ones who have passed away.

The carpool was employed because the city will reimplement the “No Entry” policy for private and public vehicles upon entry to the Bolonsiri cemetery, except for those who live in the area.

In the initial meeting of the local government with representatives of private cemeteries, Eternal Gardens and Golden Haven in Barangay Bulua also offered free rides to visitors.

The six viewing chapels in the continuously developing City Memorial Park in Barangay Camaman-an, CDO, or the former Bolonsiri public cemetery, will be open to the public on October 28.

In his report during the Monday flag-raising ceremony on October 17, the head of the Clenro (City Local Environment and Natural Resources Office), Engineer Armen Cuenca, announced that six of the 12 viewing chapels would be open to the public soon.

The opening of the viewing chapels will be under the leadership of Mayor Rolando “Klarex” Uy.

In addition, Cuenca noted that these chapels will help the indigent residents of the city who use the streets to lay the wake of their departed relatives due to insufficient space in their homes. – WhatALife!/Zed