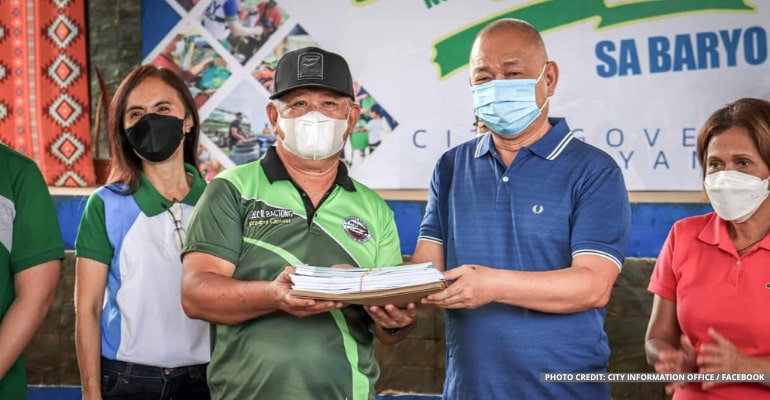 The aim of the training is to improve the ability of tanods and CVOs in responding to emergencies, especially in their community, to help save lives. The training, sponsored by the CDRRMD, will also be experienced in other barangays in the coming days.

Meanwhile, 55 beneficiaries received free Cacao, Narra, and Coffee seedlings, and six people were helped through land consultation from the Clenro (City Local Environment and Natural Resources Office), which is among those who provided their services in Klarex’s program.

CEED Head Marfe Dacoco revealed several of the residents of Barangay Balubal expressed interest in having a place in the market to sell. Meanwhile, other department managers are also happy that they served many of the barangay residents.

Around 230 residents of Barangay Balubal aged five and above were vaccinated against COVID-19. They received three kilos of rice after being vaccinated during the second phase of the ‘Klarex Village Service’ by Mayor Uy.

The COVID-19 vaccination is one of the current administration’s priorities through the City Health Office and City Health Insurance Office, with the strong support of the Department of Health 10 and ReachHealth Project USAID.

The Philhealth regional office handed over about 762 Philhealth IDs and Members Data Records of NHTS members to Captain Pablo Bactong. Meanwhile, 97 clients were also served by CHIO through Philhealth membership profiling and issuance of Philhealth ID.

The Office for Community Affairs also provided strong support for the success of the ‘Klarex Village Service’ through proper preparation and coordination between City Hall and Barangay LGU in Balubal.