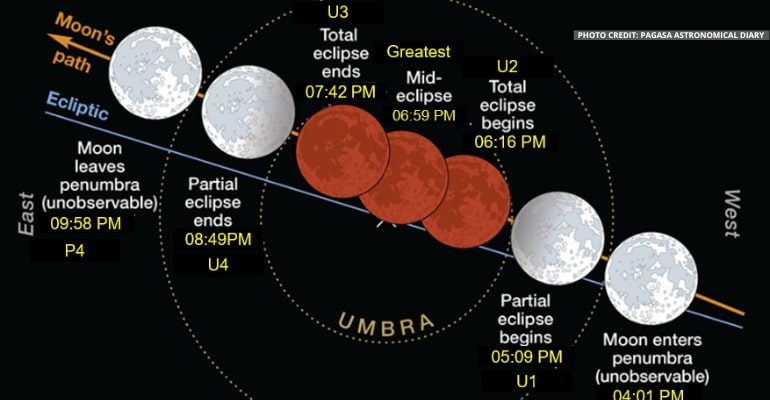 MANILA, PHILIPPINES — According to the Philippine Atmospheric, Geophysical and Astronomical Services Administration (Pagasa), the Total Lunar Eclipse or Blood Moon on November 8, 2022, will be visible in the Philippines.

The Astronomical Diary of PAGASA states that ” the eclipse will begin at 05:19 pm (moonrise), with the totality of the eclipse beginning at 06:16 pm. Greatest eclipse (maximum) or the peak stage of the eclipse at 06:59 pm.”

The total lunar eclipse, also known as blood moon, is also visible in different parts of the world, including Asia, Australia, North America, Parts of Nothern and Eastern Europe, and most of South America.

According to NASA, “it’s completely safe to watch a lunar eclipse unfold with the unaided eye.”

For those who cannot watch the event, the PAGASA Astronomical Observatory will host a live stream via the PAGASA Official Facebook Page and its Youtube channel.

Check out the predicted time of occurrence of the major phases of the eclipse in Manila below:

What are other Astronomical Events to look forward to this November 2022?

Besides the Total Lunar Eclipse (Blood Moon) on November 8, 2022, the Leonid Meteor Shower is also set to grace the skies of the Philippines this month.

PAGASA’s astronomical diary states that the “Leonid Meteor Shower, produced by comet 55P/Tempel-Tuttle, is active from November 6 to November 30, with peak activity occurring on November 18.”

The number of meteors may reach 15 per hour and “will be active once the radiant, Leo, rises in the northeastern sky around 12:00 am until before the sunrise.”

Moreover, the number of visible meteors “increases as the radiant as ascends to its highest point in the sky around 5:00 am.”

Will you need special equipment to watch the Lunar Eclipse and the Meteor Shower?

Fortunately, both astronomical events are observable through the naked eye. Although, for the eclipse, you may want binoculars for a better view.

Meanwhile, choosing a dark observation site when watching the meteor shower is advisable. In fact, shy away from the city lights and stay in areas under clear and moonless sky conditions.

Don’t forget to share your photos of these two magnificent events! – WhatALife!