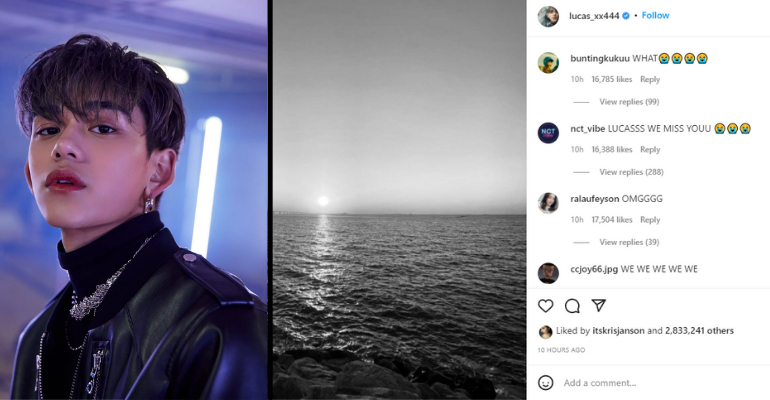 SEOUL, SOUTH KOREA — NCT boy band member Lucas has updated his Instagram six months after his controversy in 2021. Fans are asking if the star is back from his hiatus away from the public.

On February 10 KST, Lucas posted on Instagram a simple black and white photo of the ocean. This is the first time that the rapper and singer updated his social media profile after his six long months of hiatus.

NCT Lucas Issue: What We Know

In August 2021, Lucas had been called out in a shocking controversy about his personal life. A number of his exes stepped out and revealed surprising information about their time while dating Lucas.

They revealed that Lucas would often gaslight and cheat on them. There were many instances where the idol also leeched off his exes. He would ask them to buy him branded clothes, saying that he did not bring enough when he came over to their place.

He’ll also visit their hotel rooms, order food, sleep, and leave in the morning without paying and cutting off contact immediately because ‘it was uncomfortable.’

After the controversy that shocked the community, Lucas apologized to his fans and the public through a handwritten apology letter posted on his social media.

“I sincerely apologize to those who have been hurt by my wrong actions. If given a chance, I would like to express my apology directly. Looking at the situation in the last few days, I looked back on my past actions and sincerely reflected on myself,” the statement said.

After his apology, the idol pulled out from all his NCT related activities and was not seen from the public eye again until now.

His new post on Instagram is flooded by fans with supportive messages asking Lucas if he is coming back. – WhatALife!