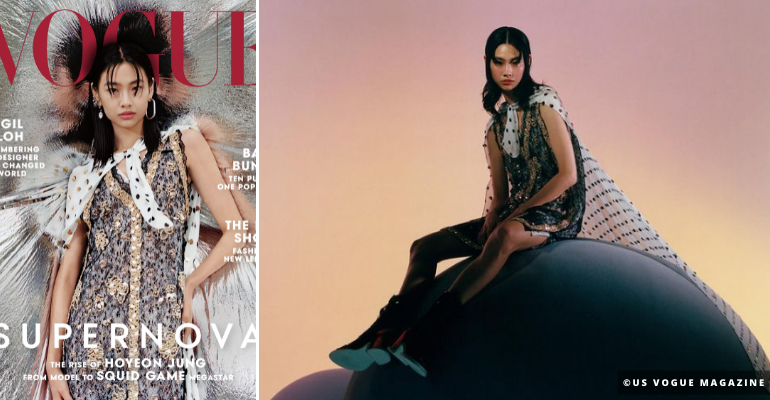 South Korean model-turned-actress Hoyeon Jung has become the first Asian and Korean star to grace the cover of the US fashion magazine Vogue solo for its February issue.

“Jung Ho Yeon has become the first-ever Asian solo cover model for US Vogue. As this is an extraordinary happening in the global fashion industry, it helps us estimate how incredible Jung Ho Yeon’s star power is,” Saram Entertainment said.

Jung sat down for an interview with writer Monica Kim, where she discussed her “rise and fall and rise again” career as a model. She also talked about how busy her life has become after the massive success of Squid Game.

“In just one month, my entire life was completely changed,” Jung said, recalling the day the dystopian series was released on Netflix.

The 27-year-old model-turned-actress was a contestant and runner-up in Korea’s Next Top Model Season 4 in 2013. She rose to stardom after appearing as one of the main characters in Netflix’s Squid Game in 2021. With the success of the series, Jung became a breakout star, and in a matter of weeks, she amassed millions of Instagram followers. She overtook Lee Sung-kyung and Song Hye-kyo to become the most-followed Korean actress on Instagram with over 23.7 million followers as of writing.

You can find Jung’s full photoshoot and interview on US Vogue Magazine’s February issue. – WhatALife.ph

Also Read: WATCH: Highly-anticipated Webtoon adaptation ‘All Of Us Are Dead’ drops trailer