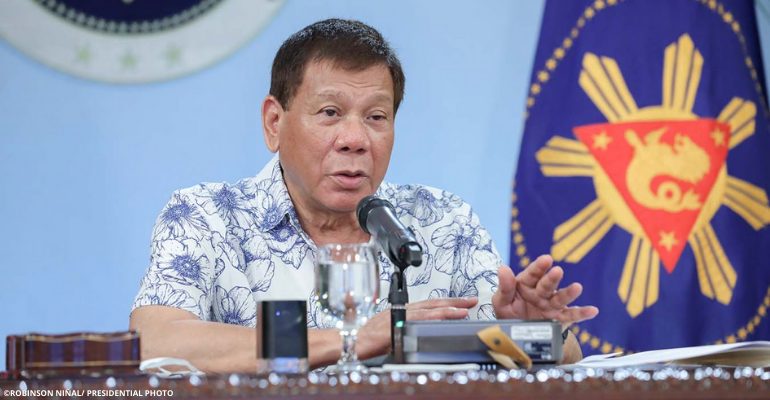 In a Palace press briefing, Presidential Spokesperson Harry Roque said the President said he had “no problem” being the first to receive the vaccine shot but will be “taking the route” of United Kingdom’s Queen Elizabeth II and her husband, Prince Philip, who were injected with vaccine doses in private.

“His answer was ‘No problem, I will take the vaccine as soon as it is available’. Dahil siya nga daw po ay talagang kailangan niyang magkaroon ng bakuna. Pero ang sabi niya, hindi na kinakailangan ipakita ‘to sa publiko (Because he said he really needed to receive the vaccine. But he said, there won’t be a need to make it public). He’s taking the route of the British sovereign dahil naging decision po nila Queen Elizabeth at ang kaniyang asawa na pribado yung pagtuturok sa kanila (because the decision of Queen Elizabeth and her husband is to do it privately),” he said.

While vaccine doses will be administered in private, Roque said the Palace will announce when Duterte has finally received his vaccine shots.

“Inaanunsyo po natin kung siya ay nagpabakuna na (We will announce when he gets vaccinated),” he said.

Duterte, in previous speeches, has expressed willingness to be the first person to be inoculated to boost confidence of the public on the Covid-19 vaccines.

Vaccine czar, Secretary Carlito Galvez Jr., said the government has been preparing for the rollout of the large-scale immunization program by next month.

However, Galvez said vaccine rollout can be moved to March if the manufacturers would not be able to deliver the shots on schedule.

The Philippines has secured 25 million doses of Sinovac vaccine with the first 50,000 doses expected to arrive in February. Still, the government is also sourcing from other vaccine suppliers to cover the entire Philippine population.

Last week, Duterte said China-made vaccines are “as good as” those produced in the United States and Europe.

He allayed fears over China-made vaccines insisting that their government would not allow their people to be inoculated with the vaccine if they were not “safe, sure, and secure”.

A recent Pulse Asia survey found that nearly half or 47 percent of 2,400 Filipino respondents will reject COVID-19 vaccine even if it becomes available, as the majority of them are concerned about its safety. Meanwhile, 32 percent said they would get vaccinated and 21 percent were undecided.

Health experts earlier said that the Dengvaxia fiasco in 2017 contributed to public hesitancy with vaccines.