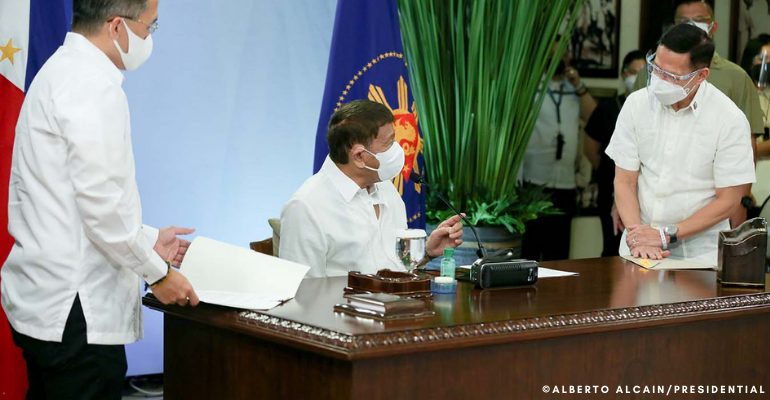 Despite having received the first dose of the vaccine brand himself, Duterte said he told an “ambassador” that he wanted the vaccines pulled out over concerns that the Sinopharm vaccine has yet to be cleared for emergency use by the Food and Drug Administration (FDA).

“Just before this meeting started, I had a talk with the ambassador. Sabi ko sa kanya, ‘Ang mga experts nagsabi na, o wala pang ano ito, ‘di pa dumaan ng examination sa atin. Ang binigay lang (I told him, ‘Experts are saying it did not go through examinations here. They just gave it) compassionate use which is really a legal excuse.’ Compassionate use. Ibig sabihin, magamit mo (This means you can use it).Compassionate. Kaya lang (But), maybe it’s not acceptable to them but it’s legal actually,” he said in a public address.

While the President did not mention any names, he might have been referring to Chinese Ambassador Huang Xilian.

Duterte added that some medical experts have raised their concerns over the “dangers” of Sinopharm’s use. Earlier, a Chinese vaccine expert referred to Sinopharm as the “most unsafe vaccine in the world,” after it was found to produce 73 side effects.

“The fact that may konting ano na hindi dumaan, para walang ano, tanggalin nalang natin (The fact that there are some concerns that it did not go through examination so that there’s no issue, let’s just pull them out),” he said.

He then asked the envoy to provide COVID-19 vaccines produced by another Chinese drugmaker, Sinovac Biotech: “Bigay mo nalang sa amin yung Sinovac na ginagamit sa lahat (Just give us Sinovac being used by everyone).”

The Philippines has already received 3.5 doses of Sinovac’s CoronaVac COVID-19 vaccine, including 1 million doses donated by the Chinese government.

He said removing Sinopharm from the country’s current COVID-19 vaccine supply would not have much of a difference.

Malacañang earlier said China donated an additional 1,000 doses of Sinopharm COVID-19 vaccines in addition to the 10,000 doses expected to be donated to members of Duterte’s close-in security detail.

“You are right. We are wrong”

Duterte also apologized over criticism that he received Sinopharm, saying he “accepted” that the drug has yet to receive an emergency use authorization (EUA) from local regulators.

“We are sorry that we committed the things that you are criticizing us for. We accept responsibility. At ako mismo nagpaturok (I got myself vaccinated) it’s the decision of my doctor. Anyway, it’s my life,” he said.

He acknowledged that he received his first dose of Sinopharm on Monday, May 43. Still, he noted that it is better to avoid issues by withdrawing the said vaccine.

He, however, insisted that his use of Sinopharm is “legal.”

“When the government allowed it to be used for compassionate use, that itself was an authority for people to be injected. Pero kokonti lang ang naturukan nito (But only a few have been vaccinated with this),” he said.

According to a report by Reuters, the World Health Organization (WHO) experts have remarked on their “very low confidence” in data provided by Sinopharm on its COVID-19 vaccine regarding the risk of severe side-effects in some patients and its overall ability to prevent the disease.

The document on Sinopharm vaccine BBIBP-CorV was “one of many resources” on which recommendations are made, tentatively scheduled to be issued later this week, a WHO spokesman said.

In this “evidence assessment” document prepared by the WHO’s Strategic Advisory Group of Experts (SAGE) to evaluate the Sinopharm shot, the vaccine efficacy in multi-country Phase 3 clinical trials was 78.1% after two doses. A slight drop from 79.34% that was previously announced in China.

“We are very confident that 2 doses of BBIBP-CorV are efficacious in preventing PCR confirmed COVID19 in adults (18-59 years),” the document said.

Among “evidence gaps,” it cited data on protection against severe disease, duration of protection, safety for use in pregnant women and in older adults, and identification/evaluation of rare adverse events through post-authorization safety monitoring.

“We have very low confidence in the quality of evidence that the risk of serious adverse events following one or two doses of BBIBP-CorV in older adults (≥60 years) is low,” it said.

“We have very low confidence in the quality of evidence that the risk of serious adverse events in individuals with comorbidities or health states that increase risk for severe COVID-19 following one or two doses of BBIBP-CorV is low,” it added.