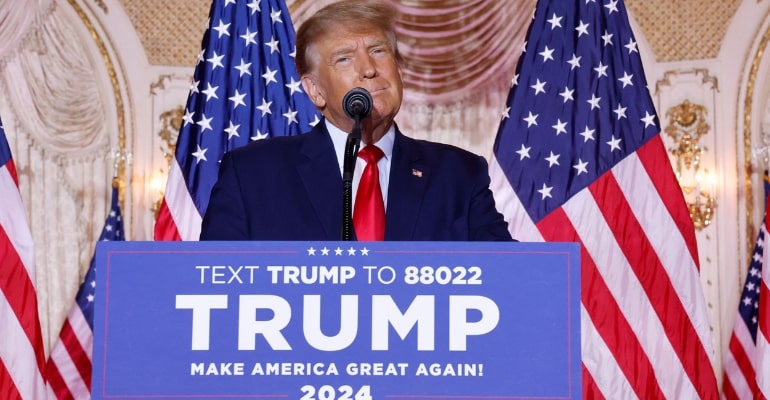 FLORIDA, USA — Donald Trump, former president of the United States of America, has once again made a bid for the presidential seat, ready for the 2024 elections.

The Republican candidate made the announcement at his Mar-a-Lago estate in Florida a week after the midterm elections. The potential rematch with Democratic President Joe Biden is also a bid to pre-empt potential Republican rivals aiming to run in the next presidential elections.

“In order to make America great again, I am tonight announcing my candidacy for president of the United States,” Trump said during his one-hour speech.

Trump proceeded to compare his administration’s achievements with the now-President Joe Biden. To the delight of his allies, the former president only mentioned in passing his conspiracy of a rigged 2020 election. Instead, he decried the “massive corruption” and “entrenched interests” in Washington.

“Anyone who truly seeks to take on this rigged and corrupt system will be faced with a storm of fire that only a few could understand,” he said.

The rare early announcement for his presidential run follows the disappointing performance of the Republican party during the midterm elections, in which Trump-endorsed candidates failed to secure a seat in congress.

CNN describes his decision as “beating others to the punch,” which allowed him “an early advantage with deep-pocketed donors.”

Despite his lavish announcement of his unprecedented third run for the presidency, only CNN and Fox News shared the news on screen (but neither carried the entire speech).

Other major networks such as ABC, NBS, and CBS have all decided to stick to their scheduled programs.

“They don’t want the American people to hear directly from the biggest leader of the greatest political movement in our history, so I do suspect they will try to censor and cut away,” told Liz Harrington, one of Trump’s spokeswoman, to the conservative channel Real America’s Voice. – WhatALife!