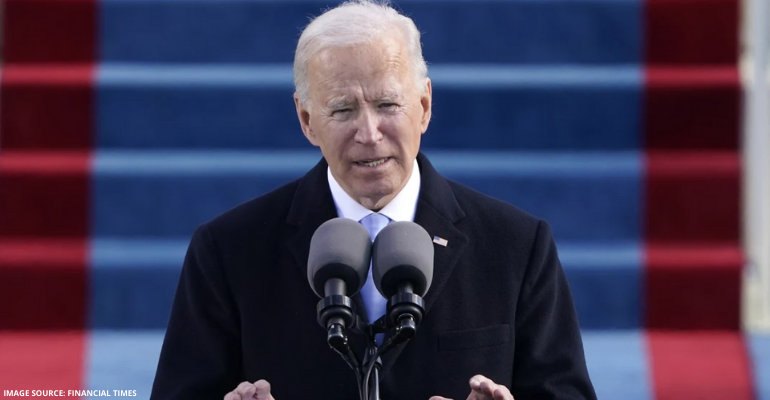 Joe Biden has been sworn in as president of the United States of America, alongside Vice President Kamala Harris, on Wednesday, January 20 (Thursday, January 21, Manila time) in a heavily-guarded but sparsely attended ceremony at the US Capitol.

Security for the ceremony was markedly increased with 25,000 National Guard troops in Washington, D.C. to secure the area after former President Donald Trump’s supporters stormed the Capitol on January 6 in an attempt to thwart a constitutionally-mandated procedure before Biden assumed office.

“I, Joseph Robinette Biden Jr, do solemnly wear that I will faithfully execute the Office of President of the United States, and will to the best of my ability, preserve, protect, and defend the Constitution of the United States. So help me God,” Biden said in his oath.

The 78-year-old Democrat took an oath of office before US Chief Justice John Roberts around noon, placing his hand on an heirloom Bible that has been in the Biden family for more than a century.

Biden takes the helm of a deeply divided nation amid a raging coronavirus pandemic that has infected over 24 million Americans and killed over 411,000 others.

“Through a crucible for the ages, America has been tested anew, and America has risen to the challenge,” Biden said as he began his inaugural address.

“Today we celebrate the triumph not of a candidate but of a cause: the cause of democracy…. At this hour, my friends, democracy has prevailed.”

Meanwhile, Former US President Donald Trump has departed the White House earlier Wednesday for the state of Florida, opting to break with a tradition that embodies the US’s peaceful transfer of power by not participating in the inaugural events.

Normally, the outgoing and incoming presidents both ride to the Capitol building to participate in the inauguration ceremony. According to the Joint Congressional Committee on Inaugural Ceremonies, the tradition has been in place “with few exceptions” since 1837.

Hundreds of thousands of people usually attend the ceremony every four years, but this year the general public was asked to celebrate at home as the US continues to find itself in the throes of the coronavirus pandemic, which has claimed over 400,000 lives in the country.

Biden vowed to face the health crisis head-on, saying the “once in a century virus” is “stalking” the US, and has claimed as many American lives as were lost in World War II.

The newly elected president will be confronting the virus’ grim realities as the country has been deeply divided during the past four years.

In urging Americans to unite, Biden noted the rising threats posed by “political extremism, white supremacy, domestic terrorism,” saying they must be confronted and defeated.

“To overcome these challenges, to restore the soul, and secure the future of America requires so much more than words. It requires the most elusive of all things in a democracy: unity,” he said. “We must end this uncivil war that pits red against blue, rural versus urban, conservative versus liberal.”

Joe Biden is the oldest president to occupy the White House. He first arrived in Washington as a young upstart and at age 29 was elected to the US Senate in 1972. He remained there for 36 years before serving as vice president from 2009 to 2017 under Trump’s predecessor Barack Obama, the first Black US president.

You Might Also Want To Read: Travel restrictions over 30 countries extended until January 31