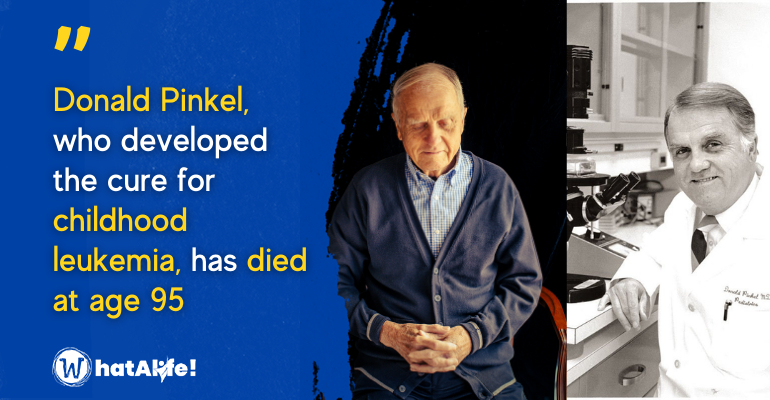 CALIFORNIA, USA — Donald Pinkel, a pediatrician who developed an aggressive treatment that would help in treating children diagnosed with leukemia, died at the age of 95 on March 9, 2022. Pinkel’s son confirmed his death at his home located in San Luis Obispo, California.

The developed leukemia treatment helped stop the disease that caused a virtual death sentence in the 1960s.

The disease was considered the No.1 “children killer” in the United States. It targets children aged between 3 and 15 and has caused a death toll of 2,000 per year.

According to an article in Smithsonian magazine in 2016, Dr. Pinkel said that the only thing he wanted to achieve was to prolong the life of the people affected by A.L.L (Acute Lymphocytic Leukemia) or what they call ‘palliation.’

In his effort to put the disease in remission, Dr. Pinkel conducted numerous experiments and tests for months, even for years. The procedures resulted in children’s loss of appetite and hair. And some even lost their lives during the procedures because of the determination to find a treatment.

During the year 1968, Dr. Pinkel’s regimen, which he called ‘Total Therapy,’ had an improving result where 20 patients out of 30 patients were able to complete the three and a half years for remission.

As the years went by, the survival rate of the regimen from Dr. Pinkel’s framework went up to 94 percent.

In the phone interview of St. Jude Hospital’s current president, James R. Downing, said that Dr. Donald Pinkel was indeed the man who found the cure for leukemia. – WhatALife!