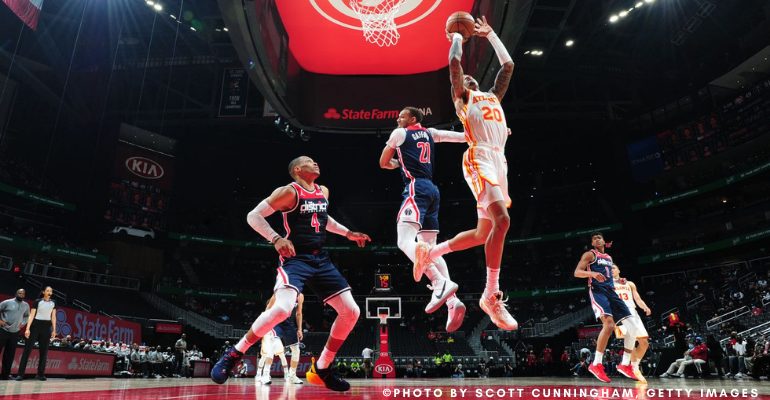 The Hawks currently rank fifth in the Eastern Conference with 38-31 and averaging 111.9 points and 1.6 points of outscoring opponents per game. On the other hand, the Wizards rank tenth with 32-37 and averaging 130 points and 50.5% shooting per game.

The Hawks vs Wizards game was a close call for both teams. Atlanta barely managed to win with a one-point difference.

It’s all thanks to key players like Trae Young, who scored 36 points, John Collins, who scored 28 points, and Bogdan Bogdanovic, who scored 25 points.

However, it is safe, to say the least, that the Washington Wizards still did their best, especially Russell Westbrook.

Westbrook made NBA history as he snagged the all-time triple-double record from Oscar Robertson. With his 28 points, 21 assists, and 13 rebounds, he played a fantastic performance that made him the new record holder. Adding to the Wizards score is Rui Hachimura with his 20 points.

Westbrook was also hailed as the all-time triple-double king in the Hawks vs Wizards game, snagging it from Oscar Robertson, who held the record since March of 1974.

But, despite his individual brilliance, he could not beat the combined 89-point effort of Young, Collins and Bogdanovic.

Although the Wizards had been scoring with ease in the first half, Atlanta was able to end the first half with a point heading into the halftime break.

The Hawks gave their all in the third quarter, which gave them a 15-point lead at 88-73. Collins was able to impose himself on both ends of the floor, while Young scored 16 points. And finally, in the fourth quarter, both teams fought to take the lead, and in the end, with just a point difference, the Atlanta Hawks won, 125-124.

What’s Next for the Teams?

The Hawks vs Wizards will have their final match against each other on Wednesday, 12 May, at 7:00 PM ET.

This will wrap up the Washington Wizards’ regular-season road schedule.

After which, they’ll finish up at home on Friday against Cleveland and on Sunday against Charlotte.

For the Atlanta Hawks, after their Wednesday game with the Wizards, they will stay home to play against Orlando on Thursday and Houston on Sunday.