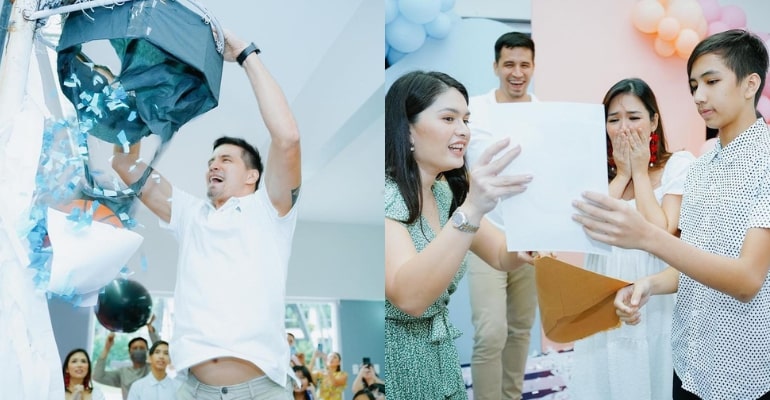 MANILA, PHILIPPINES — On Thursday, September 15, the couple Danica Sotto and Marc Pingris shared an update of their gender reveal party on their Instagram.

During the announcement, Marc, Danica and their elder children, Jean Michel and Anielle Micaela, were ecstatic.

“Still on a high from yesterday! Thank you, @joywsotto and @pauleenlunasotto, for organizing the perfect gender reveal party,” Danica said.

The revealing of the gender portion was unique. The writing on the pink and blue backdrop said, “Free throws or pretty bows?”

Marc dunks a basketball into the hoop, covered in black material, according to the pictures taken by Nice Print Photography, and releases blue confetti during the ball’s passage. Pingris’ response was priceless.

The first time Danica and Marc revealed they were expecting a third child was in June 2022. However, they appear to have wanted a new child in their prayers for some time.

PBA star player Pingris and actress Danica Sotto have complimented each other well despite coming from different backgrounds.

Danica was raised in a privileged environment, Marc had a difficult upbringing in Pozorrubio, Pangasinan, and he began working early to support his family.

But Marc, who never shied away from his modest origins and toiled tirelessly to reach his present position, has made Danica fall in love with him.

When she married Marc in 2007, things were far different from how they were when she was single and could do everything how she wanted. However, 2008 saw the birth of Jean, and 2011 saw the birth of Caela, their two elder children.

Congratulations to the couple! –WhatALife!/Brix