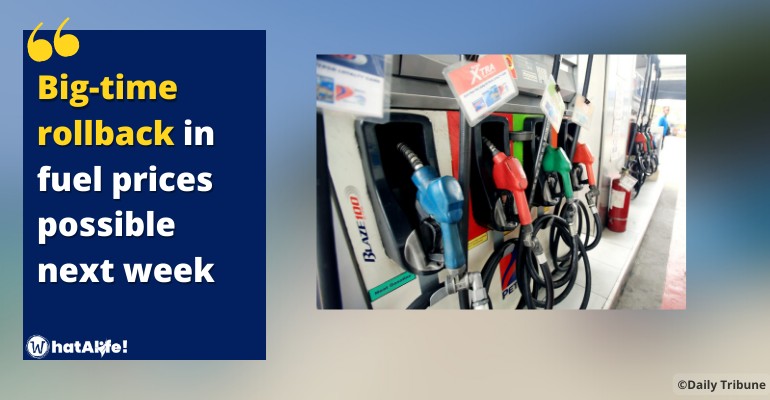 According to Energy Secretary Alfonso Cusi, a significant reduction in fuel prices could be enacted next Tuesday, March 22.

If world oil rates continue to fall, diesel and gasoline prices are expected to fall by P12 and P5 per liter next week, Cusi stated, who is keeping an eye on developments in China, Russia, and Ukraine.

In the previous two days of trading, the average price of oil was $104.79 a barrel. Cheaper than the previous week’s average of $122.61 a barrel, which prompted a big increase in local fuel prices on Tuesday, March 15.

Unfortunately, due to rising coal costs, Filipinos should expect increased power rates by May. “Because of the increase in the price of coal, the price of electricity is also rising and consumers will feel it this by May, with regard to the country’s supply of coal, it is sufficient. We maintain a 30-day inventory,” Cusi said.

Meanwhile, oil companies raised prices to their highest levels ever, increasing diesel costs by P13.15 per liter and gasoline costs by P7.10 per liter. Prices have risen by P20.35 per litre for gasoline, P30.65 per liter for diesel, and P24.90 per liter for kerosene ever since beginning of the year.

On the other hand, Cleanfuel has issued diesel price reductions of P3 and P5 per liter, effective from 4 p.m. on Wednesday through Friday, March 18.

Diesel prices will be reduced by P5 per liter in the following branches:

Diesel prices that will be reduced by P3 per liter in the following branches:

The country’s budget team has so far preferred gasoline subsidies to the postponement of excise duties, claiming that money must be “kept” during the crisis. President Rodrigo Duterte also authorized funding for the poorest half of Filipino families, equal to P200 per home each month for a total of P2,400 per year.