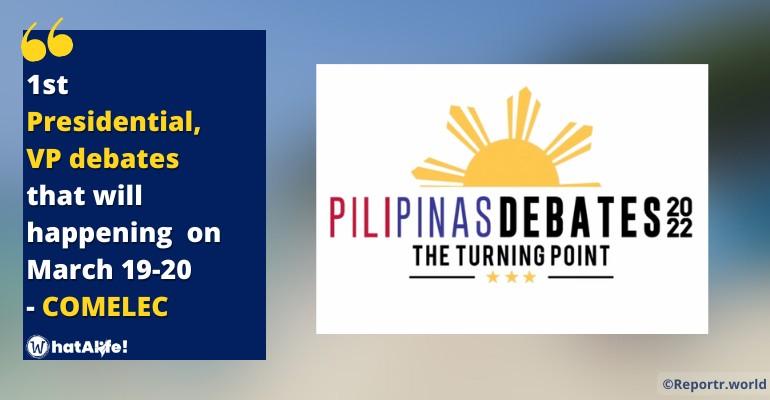 The Commission on Elections (Comelec) asked the people to watch throughout this weekend the very first Pilipinas Debates 2022.

The very first presidential and vice-presidential debates will be conducted at the Sofitel Tent in Pasay City on March 19 and 20, accordingly, at 7 p.m.,  Commissioner George Erwin Garcia said.

“We will ensure that we will be able to do it impartially, fairly, at the same equal opportunity for everyone to talk to the voters,” he added.

These are the nine candidates that are expected to attend the March 19 event:

Meanwhile, Former senator Ferdinand “Bongbong” Marcos Jr.’s spokeswoman, lawyer Vice Rodriguez, had stated earlier that the standard-bearer of the Partido Federal ng Pilipinas (PFP) will not participate in the debates.

For vice-presidential, these are the candidates that are expected to attend the March 20 event:

Lito Atienza, the former mayor of Manila, has already officially refused due to medical considerations.

Sara Duterte, Marcos’ running partner and the mayor of Davao City, would also miss the debates.

Comelec spokesperson James Jimenez stated that the public can watch the debates on television because the program will be broadcast on all local stations.

The debate will be streamed live on all of the poll body’s social media platforms, so you may watch it online on Facebook, Twitter, and YouTube as well.