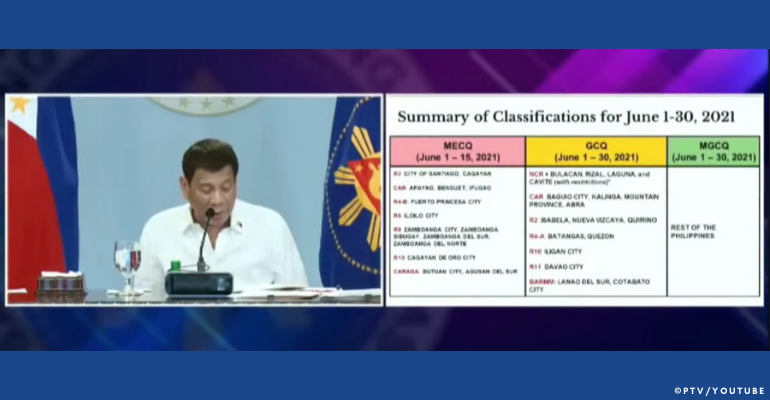 Cagayan de Oro City will be under modified enhanced community quarantine (MECQ) from June 1 to June 15.

President Rodrigo Duterte announced the latest community restrictions for specific areas in the country during a meeting with the pandemic tasks force officials on Monday, May 31.

Cagayan de Oro and 14 other areas have been placed under the stricter MECQ due to higher numbers of reported infections until June 15.

Meanwhile, the area known as “NCR Plus” – Metro Manila, Bulacan, Rizal, Laguna, and Cavite – will remain under general community quarantine (GCQ) for this month.

See below the classifications for different parts of the country beginning June 1 to June 15:

GCQ ‘with restrictions’ from June 1-15

The rest of the country is under the least strict quarantine classification, modified GCQ (MGCQ) for the entire month of June.

Watch the full announcement below.

Read the full IATF Resolution No. 118-A document below.