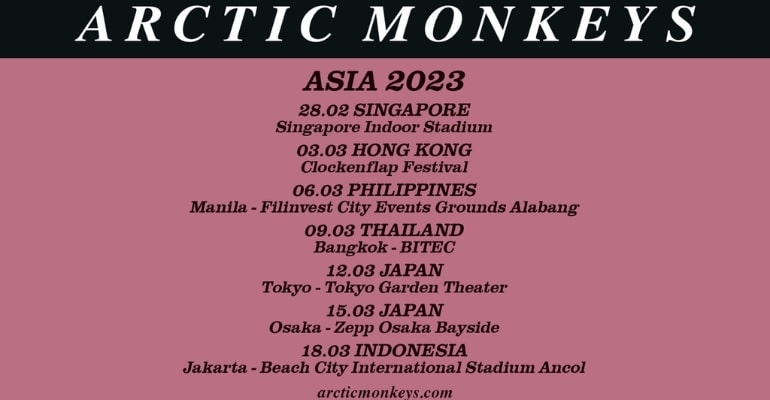 The concert will be held at Filinvets City Events Grounds, Alabang. Ticket prices for the Arctic Monkeys 2023 Manila Concert are as follows:

Those with VIP Tickets are provided with two free drinks, access to the express entry lane, an exclusive viewing deck, a private bar, and VIP toilets.

Tickets go on sale on December 12 at 10 am via tickelo.com. You may also visit the band’s official website at arcticmonkeys.com for tickets.

Other Asia Tour dates include:

The English band was formed in 2022 and broke into the scene with their debut album Whatever People Say I Am, That’s What I’m Not in 2006.

The band, led by vocalist and guitarist Alex Turner, has made over seven studio albums over the years. Tracks like R U Mine?, Arabella, I Wanna Be Yours, Do I Wanna Know? and Why’d You Only Call Me When Your High? have been fan favorites.

Just recently, the band released their seventh studio album, The Car. Their track There’d Better Be a Mirrorball in the latest album has also been nominated at the 65th GRAMMY Awards under the Best Alternative Music Performance category. – WhatALife!