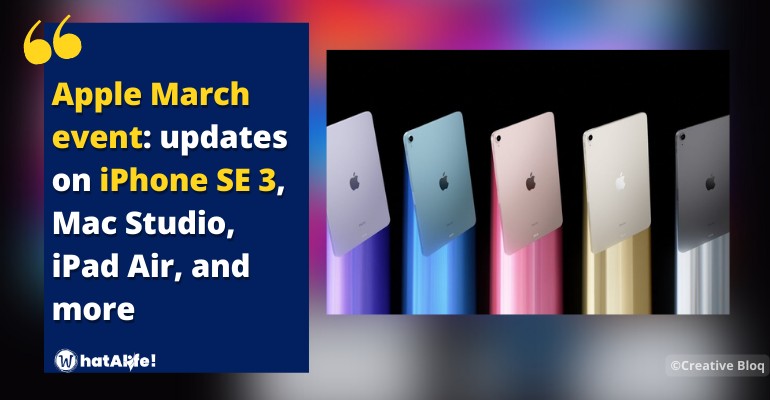 Apple’s launch event in March 2022 introduced an improved iPhone SE, a compact but powerful Mac Studio, a Mac Studio Display, and an upgraded iPad Air to the company’s lineup.

There’s a new iPad Air 5 with M1 might, while the iPhone SE 3 features A15 Bionic power, 5G, and multiple camera enhancements. Apple has revealed the new Mac Studio computer, which features a fast M1 Ultra Chip that essentially combines two chips into one. There’s also a new Apple Studio Display with 5K resolution that costs less than the Pro XDR, though still expensive.

“iPhone SE has been an incredibly popular choice with our existing users and for new iPhone customers, thanks to its iconic design, exceptional performance, and affordable price,” Kaiann Drance, Apple’s vice president of worldwide iPhone product marketing, said in a statement.

You can watch all the update from the Apple Event video below:

Here are the features of the products and its price from Apple event 2022.

iPad Air 5: The iPad Air will be equipped with Apple’s M1 chip, which will provide much improved performance as well as 5G connection. It also works with the Magic keyboard. The price range begins at $599.

Mac Studio: Consider the Mac Studio a supercharged Mac mini with an M1 Max or even more powerful new M1 Ultra chip, which provides 3.8x the processing capability than the iMac 27-inch. The price ranges begins from $1,999 to $2,999.

Apple Studio Display: There’s an Apple Studio Display is available. It features a 27-inch display with 5K resolution and 600 nits of brightness, as well as a 12-megapixel camera and a strong speaker system. The price range begins at $1,599.

Apple M1 Ultra chip: A 20-core CPU, 64-core GPU, and 32-core Neural Engine are all included in this new super device. There’s also up to 128GB of unified memory available. The processor will be available as an option in the $3,999 Mac Studio configuration.

The Apple March Event 2022 was broadcasted live on Apple’s website and through the Apple TV app. However, if you don’t have Apple TV, you may watch the show on the company’s YouTube channel (as shared above).

Also Read: Netflix Service Suspension in Russia Due to Invasion in Ukraine