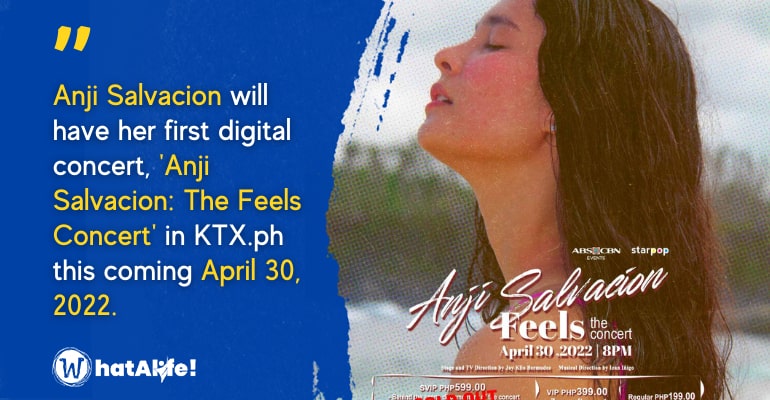 Anji Salvacion will have her first digital concert, ‘Anji Salvacion: The Feels Concert’ in KTX.ph this coming April 30, 2022.

The 19 years old Filipina actress, model, and singer is a part of Star Magic artist and the Pinoy Big Brother (PBB) Top 2 housemate for the Kumunity Season 10 this year.

According to the report of ABS-CBN News, she expressed her delight in her singing career’s latest milestone.

(I am so excited since this has been my dream since I was little and I’m just so excited to share this dream to all.)

She was also shocked as her SVIP and VIP tickets sold out just after the announcement and release of her concert tickets in late March of this year.

“I was speechless when I heard that the SVIP and VIP tickets were already sold out. I am very grateful to all my supporters, my family, and most importantly to Him. My heart is full of the support of the sunshines, sunsets, kalumots, kaalon, magulangs, and all the other fandoms under the umbrella ng TeamAnji university,” she said during an interview.

On April 5, KTX.ph then shared an announcement on their Twitter account about the additional release for Salvacion’s concert tickets.

“Due to insistent public demand, we are adding more VIP tickets to

The singer regularly performs on ASAP Natin ‘To as one of the variety show’s “new breed of singers.” She has recently released her first self-penned single ‘Dalampasigan’ and is a regular host of Bida Star Singer.

In addition, she conceptualized Dalampasigan as part of a fundraising campaign for the victims of Typhoon Odette and as a tribute to her hometown, Siargao Island. – WhatALife! / Marean