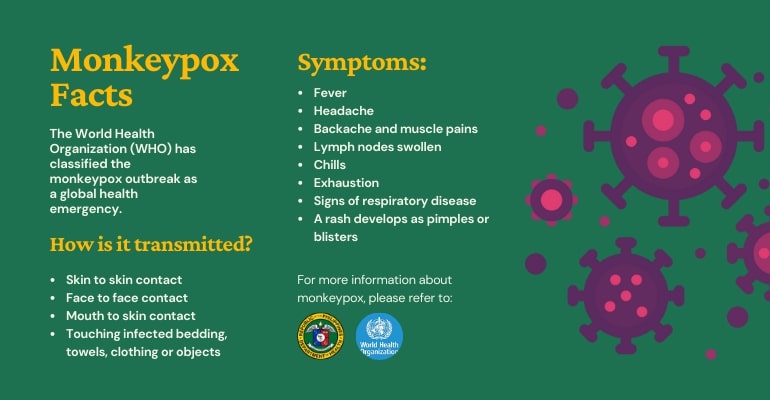 The World Health Organization (WHO) has classified the monkeypox outbreak as a global health emergency. While Europe has been severely affected, cases have also been documented in the United States, Canada, Australia, Nigeria, Israel, Brazil, Mexico, and just recently, the Philippines.

REMINDER: Anyone can get or pass on monkeypox. Stigmatising people because of a disease is NEVER ok.

Find out more about the new disease spreading around the globe below.

What is the disease called monkeypox; its origin and symptoms?

Monkeypox is the most common viral disease in central and western Africa. However, cases, generally isolated clusters or individual infections, are occasionally detected in other countries, including the United Kingdom. The first case was documented in 2018 in an individual suspected of contracting the virus in Nigeria.

Monkeypox comprises two varieties: a milder west African strain and a more severe central African, or Congo variant. Although not all countries have given such information, the current international outbreak appears to include the West African strain.

How does it spread?

Monkeypox needs intimate contact. Human-to-human transmission is expected to occur predominantly by large respiratory droplets, according to the US Centers for Disease Control and Prevention.

According to the CDC, “respiratory droplets normally cannot move more than a few feet. Thus prolonged face-to-face contact is necessary.” In addition, “other human-to-human transmission mechanisms include via contaminated clothing or linens direct contact of bodily fluids or lesion material, as well as indirect contact with lesion material.”

Where is the disease now?

According to WHO data, there have been 16,016 monkeypox cases worldwide, with 4,132 occurring in the last week. It is currently in 75 nations and territories, and five people have died.

How is monkeypox transmitted?

According to the WHO, the outbreak was primarily among males who had contact with men who had recently reported having sexual intimacy with new or multiple partners.

Experts have emphasized that anybody may have monkeypox since it is spread via close or personal contact. In addition, the UN has warned that some media representations of Africans and LGBTQ+ persons “reinforce homophobic and racist stereotypes and aggravate stigma.”

Most people are infected only with the West African strain of monkeypox. However, people must afflict those, and their contacts are identified. The virus is risky in vulnerable people, such as those with weaker immune systems or who are pregnant.

What should be the monkeypox treatment? Is there a cure?

There is no precise treatment available for the monkeypox virus. However, it is medically recommended that patients be confined in a hospital so that the sickness does not spread and symptoms are cured if they reappear.

Smallpox vaccinations, which are 85 percent effective, are used in the United States for monkeypox patients.

Antivirals and vaccinia immune globulin have also been shown to cure monkeypox patients.

What measures to take to prevent getting infected?

The CDC has warned individuals to avoid colonies inhabited by monkeypox-infected animals. Contact with things such as the infected animal’s bedding is likewise restricted. Moreover, patients infected with monkeypox must be quarantined.

If someone has come into touch with an infected patient or animal, they should thoroughly wash their hands. Healthcare practitioners and caregivers must wear a PPE kit when treating patients.

The situation is altering, and WHO expects that more cases of monkeypox will be discovered as surveillance develops in non-endemic countries.

Immediate activities focus on providing correct information to people who may be most at risk of monkeypox infection to prevent future spread. – WhatALife!/Brix

Also read: DOH confirms the first case of monkeypox in the Philippines