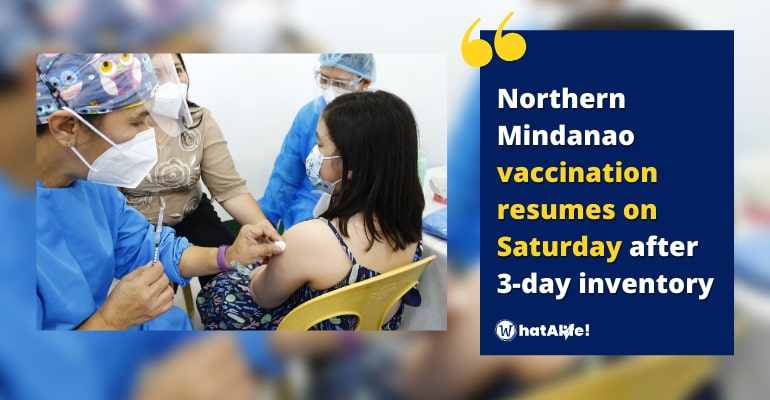 CAGAYAN DE ORO CITY, PHILIPPINES — A three-day inventory of vaccines delivered by Cagayan de Oro City and local governments in Northern Mindanao is underway before vaccinations resumes on Saturday this week, more than a year since the government’s immunization push was launched nationally.

The monitoring and evaluation of local government immunization programs in Northern Mindanao includes not only supplies but also whether or not the local governments accomplished their particular vaccination goals, according to Dr.Ted Yu.

“The ‘wall-to-wall’ inventory conducted by the Department of Health covers many aspects like the expiry period of vaccines, how many were used, the temperature maintained for some vaccines, etc. and on whether the local governments were able to fully administer the vaccines allocated to them by the government on schedule and on the intended number of recipients,” Yu said.

The Department of Health has set a vaccination target of 599,929 for Cagayan de Oro City.

Meanwhile, as of March 22, City Hall has administered the first dose of vaccines to 14,203 kids ages five to eleven years old. Around 4,859 children had also gotten their second treatment.

In addition, 392 people got their first dose and 30 people received their second dose.

“As of now, there’s a freeze in the vaccination campaign and we’ll provide the public with more data after the inventory is finished,” Dr. Yu said.

On behalf of City Health Office (CHO), they will provide data on the statistics regarding the number of outsiders who got vaccinated in Cagayan de Oro City and those who were immunized by City Hall’s mobile vaccination group that have been sent in select local authorities in Misamis Oriental.

Dr. Yu stated the city vaccinated more than 4,000 non-city people in the city\’s authorized vaccination sites and 3,000 non-Cagayan de Oro citizens in four Misamis Oriental municipalities that requested assistance from City Hall, according to their most recent data. – WhatALife! / Francis