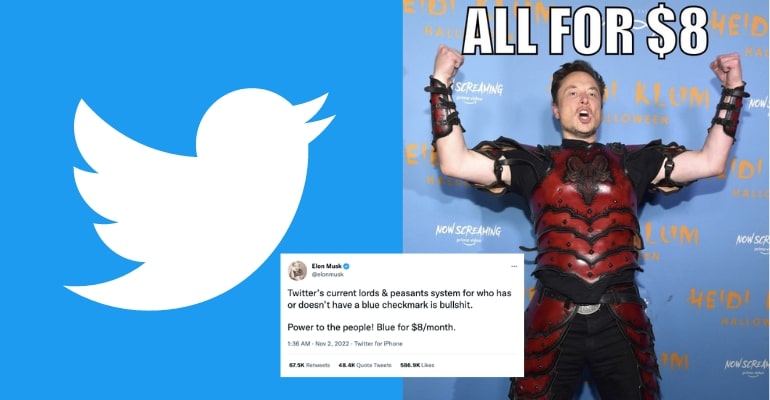 USA — As the new owner of Twitter, Elon Musk has announced a charge of 8 dollars a month for verified accounts on Twitter.

Having completed his USD 44 billion acquisition of Twitter, the billionaire, in his latest series of tweets, shared his plans to charge users USD 8 for “Twitter Blue.”

Reports indicate that Twitter will update its existing feature, known as “Twitter Blue”, which currently costs USD 4.99 per month; the paid verification feature will be included in Twitter Blue.

It is available in four countries: the US, Canada, Australia, and New Zealand, and according to the sources, initially, the pay-for-blue tick feature would be rolled out in these four countries.

Musk confirmed the news via his official Twitter handle and told the public that whether or not they complained, they would still have to pay the USD 8 per month fee for the subscription, roughly translating to PHP 469.

According to the billionaire, the paying subscribers will have priority in replies, mentions and search results, and they will be able to post longer audio and video content. Their videos will also have only half as many ads compared to regular users.

Elon Musk announced the Twitter plus paid subscription service will also fight against “spam and scam.” He added that publishers willing to work with Twitter would get to bypass the paywall.

Power to the people

The billionaire declared that this measure would bring “power to the people”, and the charges for the blue check marks signifying verified accounts will be adjusted for other countries. He added that the price would be adjusted according to the countries’ purchasing power.

The decision has received mixed reviews, and the social media community is divided over the issue. While some people have praised Musk, others are against the changing of the social media platform used regularly by millions worldwide.

There were previous reports that Twitter might consider charging a USD 20 per month fee for verified accounts. It is reported that only those who pay a USD 19.99 per month subscription fee to Elon Musk’s social media platform will be considered verified accounts.

Notable writer Stephen King was not pleased with this news when he read Twitter will be charging USD 20.

Twitter may remove the blue tick of existing verified users if they fail to pay the fees within 90 days. It’s also unclear if several international organizations and or charity accounts verified on Twitter will be exempt from this policy.

Previously, after closing the billion-dollar deal, Elon Musk made many changes across the board. He fired a few top executives, including now-former CEO Parag Agrawal and CSO Ned Segal, and afterwards, he announced the platform’s changing of the verification process. – WhatALife!/Zed