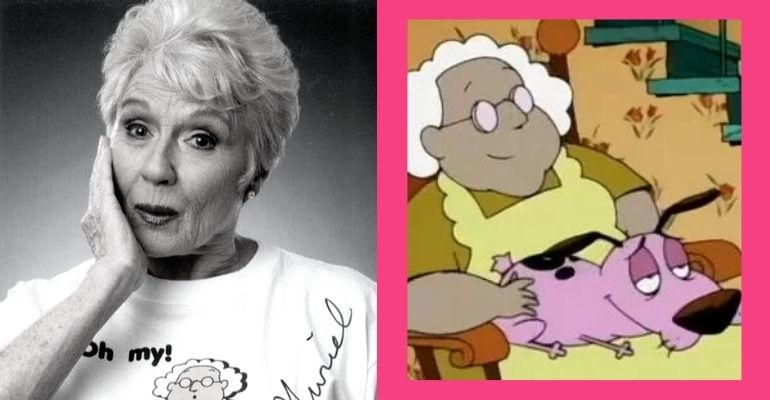 The Courage the Cowardly Dog voice actress died of surgery complications on Friday, July 30th, in Cleveland. She was 81.

Before her death, she’d been battling liver cancer. Thankfully, it’s reported that she died peacefully.

Her nephew, Brad Zitzner, reported on a Facebook post: “Sadly we lost our legendary Feefer (the voice of Muriel) on Friday morning after she fought hard with courage to try to beat her liver cancer and to resume life or to die trying.”

He went on to state that White ended up with an infection after the removal of her cancer.

Thea White lent her voice to Muriel Bagge, the Scottish owner and surrogate mother of the titular dog for the entirety of its run from 1999 to 2002. Alongside her husband Eustace, Muriel had to be rescued by their loyal and not-so-cowardly pink dog Courage once per episode.

Additionally, White was a noted stage actress. She was also a librarian and Marlene Dietrich’s personal assistant during an Australia tour. When an injury forced Dietrich into retirement, White returned to the United States.

Thea’s husband was Andy White, a drummer who made appearances on a couple of the Beatles’ early songs. They were married in 1983, but then he passed away in 2015.

The last reprisal of White’s role as Muriel was in the direct-to-video film: Straight Outta Nowhere: Scooby-Doo! Meets Courage the Cowardly Dog, to be released September 12th of this year.

John Zitzner, White’s brother, reported that Thea had been “looking forward to seeing the new film,” according to one of his Facebook posts.