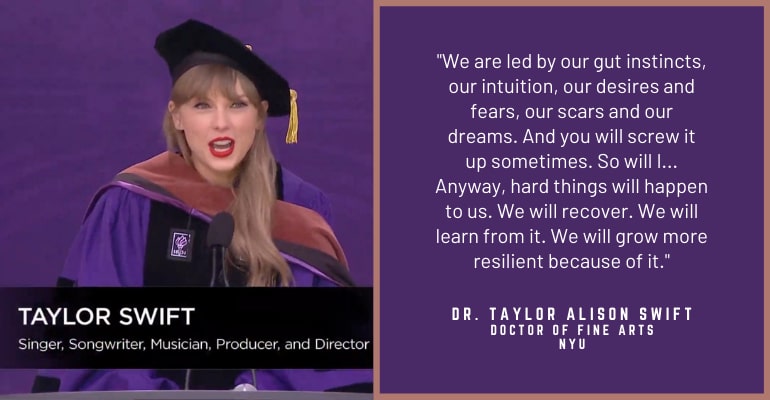 NEW YORK, USA — On Wednesday, May 18, 2022, Taylor Swift received an honorary doctorate of fine arts from New York University and delivered her first-ever commencement address at Yankee Stadium during the 2022 graduation ceremony that honored the Classes of 2020, 2021 and 2022.

It was in March that Taylor Swift was announced that she would be receiving the honor and addressing the school as a speaker.

After receiving her award, she took the stage for a 20-minute speech in which she shared personal anecdotes, imparted wisdom from her career, and assured the audience that making mistakes is unavoidable.

In her speech, Swift joked, “I’m 90% sure I’m here because I have a song called ’22,'” and shared that she “never got to have a normal college experience,” citing the fact that she only attended public high school until 10th grade in order to pursue her music career.

“Last time I was in a stadium this size, I was dancing in heels and wearing a glittery leotard. This outfit is much more comfortable,” Swift said, later referring to her 1989 hit song.

“To all the parents, family members, mentors, teachers, allies, friends and loved ones here today who have supported these students … let me say to you now: Welcome to New York. It’s been waiting for you”, she added.

Swift also jokingly thanked NYU saying, “I’d like to thank NYU for making me technically, on paper at least, a doctor. Not the type of doctor you would want around in the case of an emergency, unless your specific emergency was that you desperately needed to hear a song with a catchy hook and an intensely cathartic bridge section.”

Swift then ultimately advised the graduates to trust their “gut instincts” even in the face of fear.

“You will screw it up sometimes. So will I. And when I do, you will most likely read about it on the internet. Hard things will happen to us. We will recover. We will learn from it. We will grow more resilient because of it,” she said.

She then concluded her speech saying “I hope you know how proud I am to share this day with you. We’re doing this together. So let’s just keep dancing like we’re … the class of 2022.”

“It’s an incredible honor,” he said in an interview on a media outlet. – WhatALife!