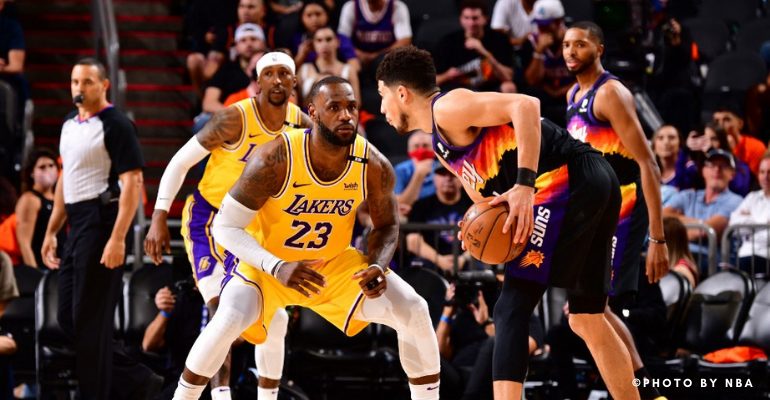 The Phoenix Suns took control of their first-round playoff series by taking a 3-2 series lead against the Los Angeles Lakers in Lakers vs Suns Game 5, 115-85.

With Anthony Davis suffering from a groin injury in Game 4, Phoenix took advantage by playing offense every chance they get. The Lakers could not put up much of a fight, resulting in the Suns scoring nearly at will and building a 30-point halftime lead. This was the largest halftime deficit the Lakers had in 25 years.

Injuries have shaped the series

The first-round playoff series between the teams saw a lot of injuries. The Phoenix Suns won Game 1 despite Chris Paul’s shoulder injury. Afterwhich, for Games 2 and 3, Los Angeles won by taking advantage of Paul’s absence. However, the Phoenix won in Game 4, 102-94, after Davis went down with a groin injury.

For the Lakers vs Suns Game 5, the LA Lakers ruled out Davis due to a strained left groin. He tested his groin on the court an hour before tip-off. According to Lakers coach Frank Vogel, “it’s a medical decision.” Because of this, Markieff Morris started in his place.

Also, Paul went down in Game 5. He reinjured his shoulder in the middle of the third quarter when Wesley Matthews fouled him. He returned to the game to shoot 2 free throws and then headed to the locker room for treatment.

The Suns were aggressive during the Lakers vs Suns Game 5

Phoenix gave an all-out performance in a Davis-less game by repeatedly getting into the lane for shots or kickouts for open looks. Devin Booker led the team, scoring 36 points on 11-of-24 shooting. The young All-Star was a pivotal player in the series. He scored 18 points in the first quarter and shot a corner jumper to put Phoenix up 18 early in the second.

Despite LeBron James becoming more assertive in the third quarter of Lakers vs Suns Game 5, the Suns maintained their 29-point lead. They made eight 3-pointers, 26 of 48 shots, and had one turnover to lead 66-36 at halftime. James scored 17 of his 24 points in the third quarter.

According to James, “We got our ass kicked. It is that simple. They did whatever they wanted to win this game.”

Watch the Lakers vs Suns Game 5 Highlights below.

Game 6 is this Thursday, June 3, and will take place in Los Angeles.

Also Read: Washington staves off elimination with their first win against the 76ers