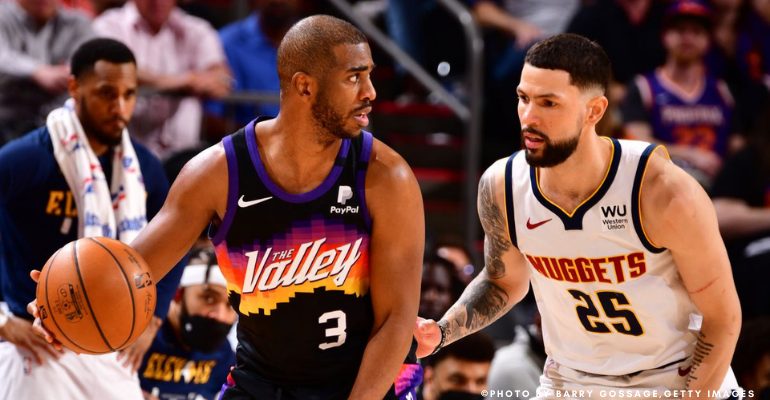 The Phoenix Suns pulled out another impressive victory against the Denver Nuggets in Game 2 of Suns vs Nuggets on Wednesday night. They now take a 2-0 lead in the second-round series.

This is the Suns’ fifth straight win this postseason. And it’s all because of Chris Paul, who led Phoenix with 17 points, 15 assists, and 0 turnovers. Devin Booker added 18 points and 10 rebounds.

The Suns had a 10-point halftime lead in the second game of the Suns vs Nuggets. Moreover, Jae Crowder added a pair of 3-pointers early in the third quarter and made it 60-43. They also led an 86-67 advantage into the fourth. In the final quarter, Phoenix led by 31 points and relentlessly dominated the game even as their lead built. All five Suns starters were able to score in double figures compared to only two for Denver’s first five.

Newly awarded MVP Nikola Jokic led the Nuggets with 24 points, 13 rebounds and 6 assists. However, his performance was not enough because of the minimal help from his teammates. Thus, Nuggets coach Mike Malone will have to find a way to get Denver going, especially Aaron Gordon and Michael Porter Jr., who only combined for 17 points on 6-of-20 shooting in Game 2 of Suns vs Nuggets.

36-year old Chris Paul is one of the best players in NBA history. He was able to show his impressive passing ability in Game 2 of Suns vs Nuggets. He picked apart the Nuggets’ defense with his accurate passing and set his teammates up with several open opportunities throughout the game. Paul had compiled 15 assists with 0 turnovers.

This wasn’t Paul’s first time to record at least 15 points, 15 assists and 0 turnovers. He has now accomplished the feat three times. This is equivalent to the number of times as all other players combined since 1980.