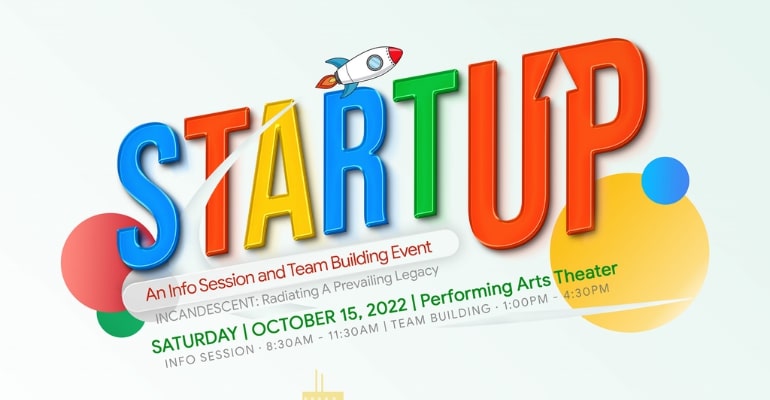 The best way to greet and invite new members is to hold a team-building event! Therefore, the Google Development Student Club of USTP held the Start UP: Incandescent, an info session, and team-building event last October 15, 2022.

Let us look at the exciting welcome party held by the GDSC-USTP.

What is Start-UP: Incandescent?

The Start-Up: Incandescent was held for a whole day last October 15, 2022, by the GDSC-USTP. It was an event that aimed to promote camaraderie among its club members, both old and new, and strengthen their bonds. In addition, the info session helped encourage the newly enrolled students to join the club by having speakers from other branches share their experiences!

Meet some of their speakers below:

The speakers showed their love and passion for technology and web development by joining the GDSC.

What is the purpose of the GDSC?

Graduates and undergrads aiming to grow as developers are welcomed with open arms. Moreover, the GDSC encourages peer-to-peer learning environments and builds solutions for local businesses and communities.

The first team-building event was the pointing game, where the members gathered and shared their strategies and teamwork as they tried to avoid the direction pointed out by the facilitator. Of course, the team must stay away from the direction indicated, as it’ll result in the whole team having to start over.

The game encouraged everyone to feel that they belonged to a team by making them responsible for the team’s failure if they made a mistake. Once you acknowledge that you are not alone, working together with the other members becomes easier.

The second event is played by gathering the members as they guess the word/phrase from the actions of another member who may not speak.

The best part of this game is that it makes everyone think outside the box. In addition, you get to share ideas with everyone making it a fun way to make friends and strengthen bonds.

The members gathered as they guessed the location of a video, picture, or other graphical representation shown by the facilitator. The team showed their teamwork as they brainstormed on speculating the place indicated on the given material.

With the amount of brainstorming this game entails, each team has to give an answer based on everyone’s guess. In addition, exchanging ideas is one of the most effective ways to connect with other people, and this game pushes it to the limit!

The members gathered as they named a noun based on the assertions in the given letter. The team showed their teamwork as they brainstormed on guessing the answer.

Since each team had already warmed up their brains from the previous game, the fourth game seemed effortless, as many teams proceeded to advance to the next stop in less than 5 minutes.

The members gathered as the facilitator indicated where they should place their hands, which can be their head, shoulder, knees, toes, or cup. Their primary objective was to hold the cup between two opposing teams, the person that gets to grab the cup first gets eliminated, and the last team standing will lose.

The fun in this game is watching people reach for the cup from awkward positions. However, the importance of this game is shown by having each team member participate. Not only will they be able to influence the flow of the game, but they are also rewarded by being able to see the fruits of their hard work.

The Start UP: Incandescent event was a huge success, having been able to establish its presence. In addition, the support of its members was very prominent as they went all out with the event. Congratulations!

To get to know more about GDSC-USTP, check out their Facebook page today. – WhatALife!/Vaughn