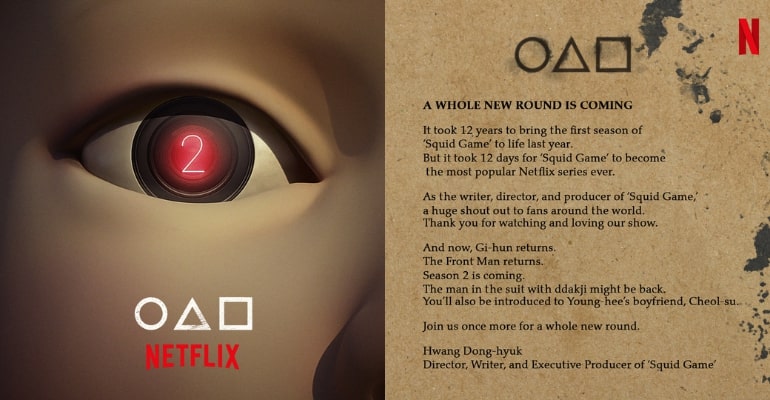 On June 13, 2022, Netflix announced the comeback of their most popular South Korean series that shattered many streaming records – Squid Game.

Writer and director Hwang Dong-hyuk confirmed the new season with a teaser and a letter to fans.

“It took 12 years to bring the first season of Squid Game to life last year. But it took 12 days for Squid Game to become the most popular Netflix series ever,” the director said.

Executive producer Kim Ji-yeon said that they are currently working on the script and forming the story. She also shared that there is “a lot of pressure” on making Season 2 better than the last.

“I know that a lot of the different fans and audiences have enjoyed the series very much, but really we’re focusing on how to make it even more joyful to the global audience,” she said.

Hwang’s letter also confirmed who will be returning for the next season. The winner of the last game, Gi-hun will be back, including The Front Man. The fan-favorite “Red Light, Green Light” doll Young-hee will, unfortunately, not be making an appearance. Instead, her boyfriend Cheol-su will take the stage.

The Salesman, played by actor Gong Yoo, is also teased by Director Hwang for a return saying, “The man in the suit with ddakji might be back.”

Squid Game is a dystopian K-drama where chosen citizens gamble their lives to win a life-changing cash prize. They take part in childhood games that are designed with consequences that are both brutal and terrifying. Players compete against each other, with losers fatally eliminated until one man or woman is left standing.

Check out the first season of Squid Game on Netflix today! – WhatALife!

Also read: ‘All Of Us Are Dead’ Season 2 CONFIRMED