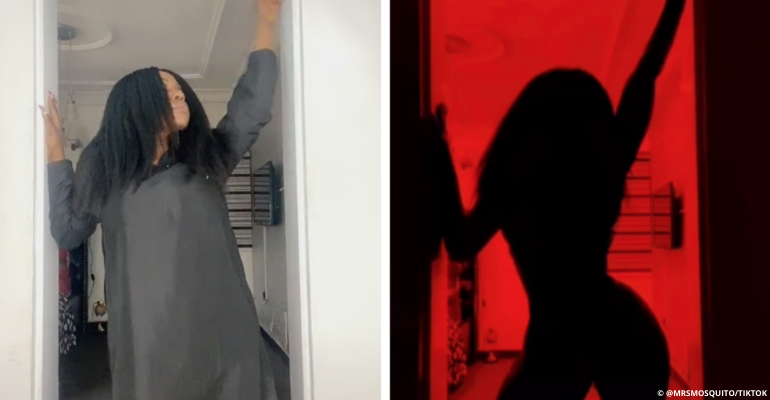 If you’ve been hanging around TikTok lately, for sure, you’ve seen the silhouette challenge with its distinct red filter.

With its daring, sexy vibe, thousands of people have taken part in the challenge, making it the latest viral trend on the platform.

The challenge includes posing under a doorway in a casual outfit in a normal setting at the start before it cuts to the subject in dimmed lighting, with a red filter over their seductive silhouette.

the lightswitch didn’t want it to happen #foryou #bodyconfidence #allsizesmatter

♬ Put Your Head On My Shoulder – Giulia Di Nicolantonio

According to BuzzFeed News, the trend began as a form of empowerment, a way for people to feel sexy and good in their bodies. It particularly highlights the subjects’ curves, with some going totally nude and trusting the red filter to cover up any explicit body parts. But of course, this is the internet, and some people have found a terrible way to turn a feel-good trend into depraved gratification.

Following the viral trend, video tutorials are now scattering over YouTube, instructing thirsty people how to use editing software or apps to change the contrast and color to reduce the silhouette effect. According to Pop Inquirer, while deleting the filter is impossible, people with predatorial motives can still remove the red tint and increase the video’s exposure to unveil a clear image.

A search on YouTube readily turned up dozens of results for these tutorials, BuzzFeed News stated.

This incident sparked a conversation about consent on social media. Given the risk, people, especially women, are now warning each other about the tutorials and advising them not to be fully naked if they want to participate in the challenge.

“Just make sure you’re being cognizant of what you’re wearing before you do all the editing for the final product,” a TikTok creator said.

♬ Put Your Head On My Shoulder – Giulia Di Nicolantonio

In a follow-up, @lostvsnryshots refuses to share tips on how to reverse-edit the videos and shows comments from people saying the post had “ruined” the fun.

Fyi, report and block @Brezzlova. This is one of the people editing and posting women’s silhouette challenge videos without the filter.

Just scrolling down his media tab, he’s done this to over 10 women so far.

Asking women why they did the #SilhouetteChallenge if they didn’t want the filter stripped and their nudes posted without their consent is the exact same as asking why someone went to a party, dressed a certain way, was out late, or got drunk if they didn’t want to be assaulted.

PSA: if y’all do the #silhouettechallenge please do not do it completely naked. Long story short, red is a primary color that can be easily removed with video editing. If you don’t want your naked highly visible butt shared on the web.. you know the rest

I said this yesterday and I’ll say it again today.

There is a creep who is removing the red filters from the video and exposing women’s naked bodies!

If you happen to see these predatorial tutorial edits on social media, please do report them. Don’t turn a blind eye and wait before someone from your family or friends became a victim.