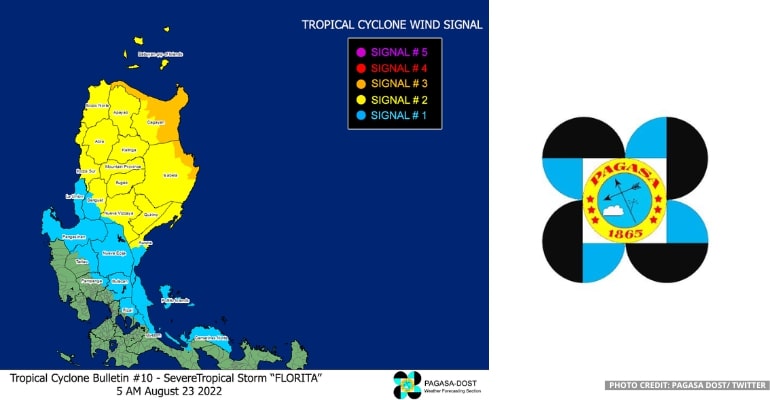 The rest of Cagayan, including Babuyan Islands, the rest of Isabela, Quirino, the Eastern and Central portins of Nueva Vizcaya, Apayao, Abra, Kalinga, Mountain Province, Ifugai, Northern portion of Benguet, Ilocos Norte, Ilocos Sur, and the Northern and Central portions of Aurora are in Tropical Cyclone Wind Signal No. 2.

Heavy to intense, at times, torrential rains expected over Cagayan, Isabela, CAR (Cordillera Administrative Region), Ilocos Region, and Zambales. Meanwhile, moderate to heavy with, at times, heavy rains are expected over the northern portion of Aurora, Bataan, Tarlac, and the rest of Cagayan Valley, and light to moderate with at times heavy rains over Metro Manila, CALABARZON, Camarines Norte, and the rest of Central Luzon.

“On the other hand, rains are still expected due to the Southwest Monsoon.” PAGASA forecaster Aldczar Aurelio reported.

In the next 24 hours, the areas that will experience Light to Moderate to sometimes Heavy rain due to the Southwest Monsoon (Habagat) include the Western Visayas, MIMAROPA, and the rest of the Bicol Region.

PAGASA cautions people to remain careful, alert, and ready for possible scattered to widespread flooding, including flash floods and rain-induced landslides, especially in localities with significant antecedent rainfall and in areas that are highly or very highly susceptible to these hazards as identified in hazard maps. –WhatALife!/Zed