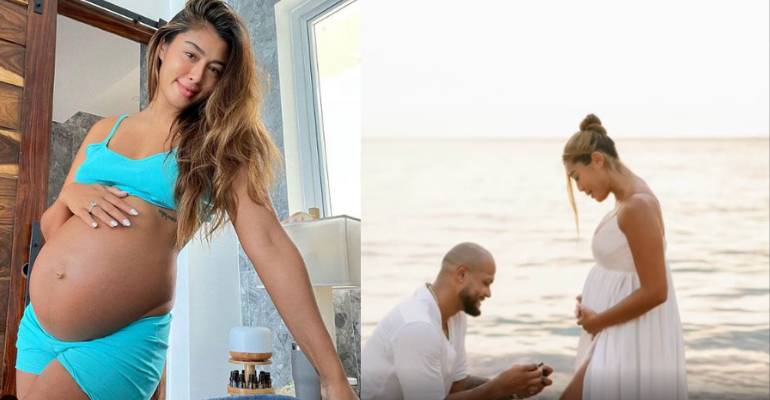 While the beauty queen is preparing to welcome her first child with the Filipino-American professional basketball player Sol Mercado, she rushed to social media with her excitement about giving birth.

She posted snapshots of her and her fiance with her wearing aqua-blue two-piece attire.

Sandra then expressed her gratitude for her current healthy pregnancy, alongside the support system she is receiving.

The former delegate of Miss Universe Philippines and her partner confirmed their relationship last year in September, after months of the circulated speculations from their fans. They then shared an announcement on March 14 about being engaged and their upcoming first child.

The social media influencer shared their special moments by posting a short video clip capturing them on the beach while flaunting her baby bump alongside a separate post of a video revealing and celebrating their baby’s gender.

The 27-year-old fashion model was one of the candidates who contested for the crown of Miss Universe Philippines 2020. She was also the chosen representative for Taguig City and topped 16th place in the competition. In addition to her reigning moment, she also vied to win the pageants Miss World Philippines 2016 and Binibining Pilipinas 2018.

Meanwhile, Sol’s last play was in the Philippine Basketball Association for the Northport Batang Pier held in 2019. He recently celebrated his 38th birthday last Friday, May 6, where Sandra greeted him with a video of their photos together with a birthday greeting in the caption. – WhatALife!