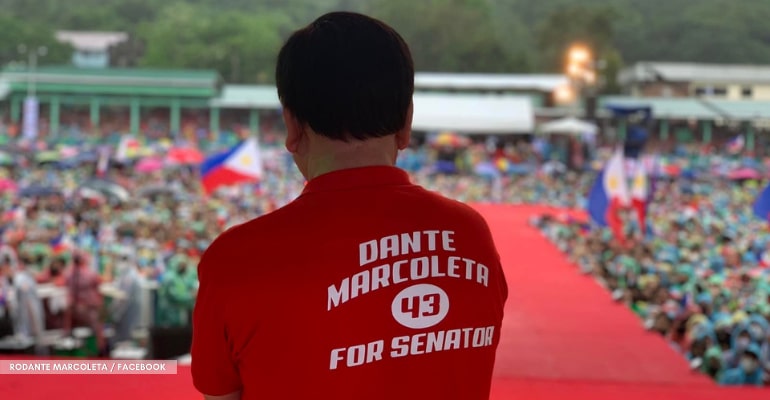 MANILA, PHILIPPINES — On Wednesday, Rep. Rodante Marcoleta of the SAGIP party-list has withdrawn from the Senate race in 2022, according to the Commission on Elections (Comelec).

Marcoleta announced his decision to withdraw his senatorial campaign in a press release, citing his “poor” pre-election polling results.

Marcoleta’s withdrawal was accepted by the Comelec during its most recent meeting, according to Commissioner George Garcia.

“The fighter in me should also be brave enough to read the writings on the wall. Let’s call a spade a spade,” Marcoleta said.

“I will be indebted forever to several people who chipped in their resources, time, and tons of hard work into my memorable campaign,” he added.

Marcoleta stated he will keep supporting former Senator Ferdinand Marcos Jr. and Sara Duterte, as well as the UniTeam and PDP-Laban senatorial candidates.

Meanwhile, in a recent one-on-one interview with Marcoleta, President Rodrigo Roa Duterte disclosed that he was one of the persons who encouraged the congressman to run for senator.

On April 9, Duterte lauded Marcoleta as a “principled man, extremely honest, and a [man] with integrity” which aired on state-run PTV-4.

He expressed gratitude to President Rodrigo Duterte for “his positive and generous endorsements, as well as the efforts of the PDP-Laban and the People’s Reform Party, which recently chose him as its senate candidate.” – WhatALife!