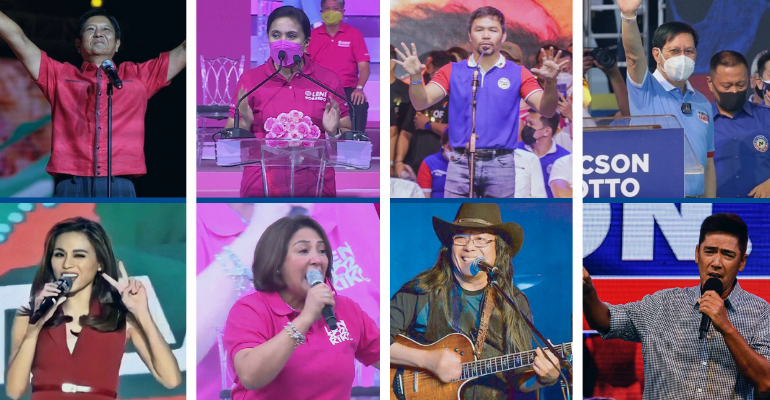 The official campaign period has begun on Tuesday (February 8) and is kick-started by proclamation rallies all over the country by national presidential and vice-presidential candidates. Several celebrities also showed their support to their chosen aspirants by hosting, singing, and offering their messages to supporters.

Find out who is supporting who for elections 2022 below:

The BBM-Sara Proclamation Rally (dubbed as the UniTeam Rally) was hosted at the Philippine Arena in Bulacan. The arena, which usually houses 50,000 people, is filled up to 25,000 following the rules set by DOH and COMELEC. The doors to the arena opened at 2 pm, and the event began a few hours later.

Some of the key celebrities who showed up during the rally are Kapamilya host and actress Toni Gonzaga, who hosted the event and singer and actress Karla Estrada, who sang at the event.

Presidential candidate Leni Robredo hosts her proclamation rally along with vice-presidential aspirant Kiko Pangilinan in Naga City, the home of Leni. The event kickstarted in the late hours of the afternoon, with stars showing up to offer their support.

Actress Cherry Pie Picache sends her message to supporters on stage. She becomes emotional and shares that her choice lies for the future of her children, “Isang kinabukasang kulay rosas,” referring to the official campaign colors of Leni – pink.

Agot Isidro, Nikki Valdez, Pinky Amador, at Gab Valenciano were also on site, while other celebirites suh as Iza Calzado, Jolina Magdangal, and Gary Valenciano gave their messages on video.

The rally ended with a performance by Rivermaya, performing “Liwanag sa Dilim.”

The Pacquaio-Atienza Proclamation Rally started early in the afternoon and took place in the home of the presidential candidate at General Santos City. Manny Pacquaio’s wife and mother attended the event and gave their own speeches for Pacquiao supporters.

Singer Freddie Aguilar endorsed the senator and gave a performance.

The Lacson-Sotto tandem launched their campaign in Imus, Cavite. The event had around 4,000 attendees. The candidates attended a mass first before showing up at the venue. Kapuso actor and host Vic Sotto also makes a surprise the stage to show support for the tandem.

The pair joked with Tito Sotto saying his brother had numerous spouses while Vic announced to the people to vote for him.

For full live videos of the proclamation rallies of the national presidential and vice-presidential candidates, head over to our Facebook page! – WhatALife!