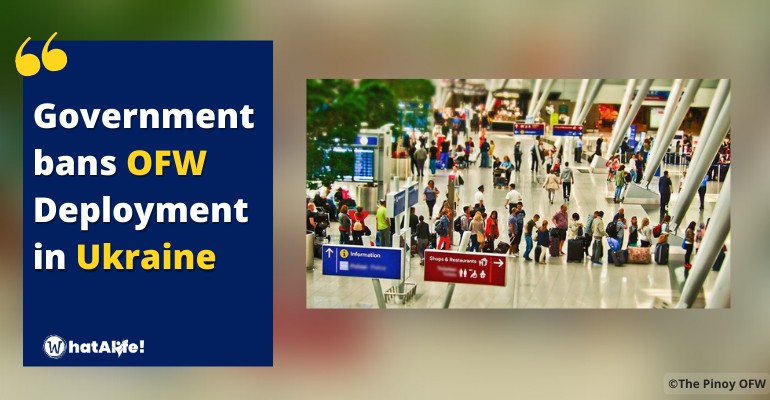 According to the Philippine Overseas Employment Administration, the government has enacted a total prohibition on the deployments of overseas Filipino workers in Ukraine.

“Because the DFA (Department of Foreign Affairs) has raised the alert level in Ukraine, this is Alert Level 4 and because Ukraine is Alert Level 4, the POEA governing board issued on Wednesday saying that no one will be allowed to leave and work in Ukraine,” said POEA chief Bernard Olalia at the Laging Handa briefing.

Due to the rapidly worsening security situation following Russia’s invasion, the Department of Foreign Affairs has previously increased Emergency Alert Level 4 in all territories of Ukraine.

“In 2014, we no longer deployed OFWs to Ukraine, because of Alert Level 2. The only OFWs who are allowed there are what we call returning workers,” Olalia said.

“In 2021, there were no returning workers but last 2020 there were four; in 2019 there were 12. They are our domestic workers and also skilled and professional workers,” Olalia added.

Most of the land-based employees were evacuated, according to Olalia, excluding those married to Ukrainians.

“Our challenge right now is the seafarers numbering to over 200 who are still onboard but we are currently arranging their repatriation using humanitarian corridor, as what we call it,” he stated.

He also mentioned that the government is willing to assist returning OFWs in finding new jobs abroad, whether through agencies or direct employment.

Those returning foreign Filipino workers from Ukraine would receive support from the government, according to the administration.

Olalia explained that agency recruits will simply come to POEA and then they will look for job orders, compare their talents and expertise with the available job orders, and coordinate with the licensed recruitment agencies.

“For direct hires, if they have relatives or they know employers abroad who are willing to give them a job, we will help them process their direct hire application,” Olalia added. – WhatALife!