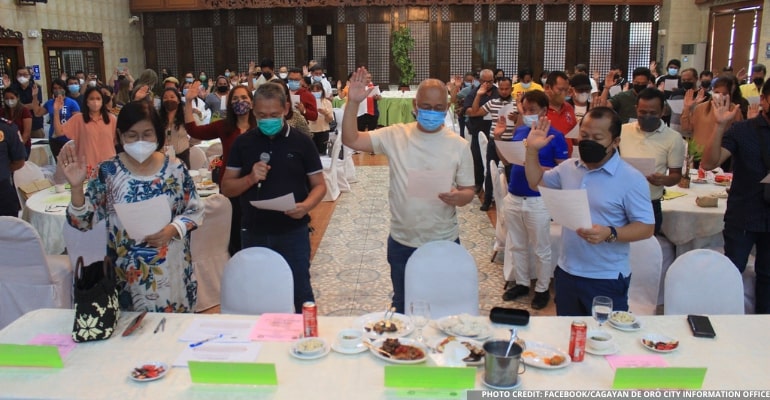 CAGAYAN DE ORO CITY, PHILIPPINES — Mayor Rolando ‘Klarex’ Uy, barangay captains, and City Hall officials led the swearing and signing of the ‘pledge of commitment’ of the ‘PinasLakas Bayanihan’ in the region for the PinasLakas vaccination and booster campaign.

The event was held on Friday, September 2, during the ‘Gathering and collaboration of local officials for the success of PinasLakas Bayanihan’ organized by the Department of Health Region 10.

Previously on July 26, the PinasLakas Booster campaign was launched nationwide per the presidential directives of the first 100 days of President Ferdinand Marcos Jr.’s tenure to achieve 90% primary vaccine coverage for senior citizens and 50% coverage for those 12 years old and above.

In the meeting, Mayor Klarex once again asked the barangay captains and officials to support the local government’s vaccination program, general health program, the City Health Office, and the DOH-10.

(The important thing is to give security to yourself and your loved one, and above all, safety to your fellows and society.)

The mayor also revealed that the city is willing to give 3 kilos of rice to senior citizens who are administered vaccinations and boosters if this will persuade the people.

The medical coordinator of the City Health Office, Dr. Ina Grace Chiu, revealed that according to the data for September 1, the primary vaccine coverage of senior citizens is still at 81.48%, while the first booster coverage of those aged 12 and above is 39.38%.