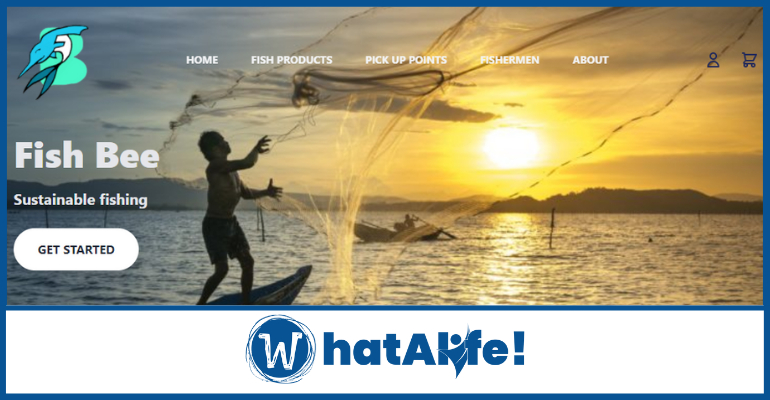 The Philippine archipelago, made up of over 7,000 islands, has numerous fish species at its coasts. And with that, fishing has always been an important source of livelihood for Filipinos. In fact, it is among the primary economic sectors along with agriculture and forestry.

Surrounded by these rich natural resources, seafood makes up more than half of Filipinos’ primary protein at every meal, creating heavy demand and leading to overfishing issues.

Because of this, the once abundant fish species are now threatened to extinction due to uncontrollable and unsustainable overfishing practices. Despite the government’s efforts towards implementing safe and sustainable fishing, these illegal and harmful techniques continue to persist.

Fishbee: Where It All Started

Back in 2017, Engr Pascua, who is also part of the University of Science and Technology of Southern Philippines (USTP) faculty, was in the middle of his Ph.D. project when the idea of Fishbee was born.

He was introducing a device he created to sea wardens that would aid them in guarding marine protected areas. However, the motivation for these sea wardens, who are also fishermen, to use the device was missing.

Working with the fisherfolks for a while now, Engr Pascua can’t help but notice their trading system. Unlike the commercial fishery, these local fishermen sell whatever they catch that morning directly to their patrons, passersby along the highway, and some through “suroy” (going around the neighbourhood). But, as you all know, fish is perishable. And those that didn’t sell either turned into a fisherman’s meal or wastage.

His experience with tasting the unique umami flavour of fresh fish also contributed to creating the platform. But aside from helping them, he’d also like consumers to have the same gastronomical experienced he had with fresh fish.

Engr Pascua created Fishbee, a company that sells fish directly to consumers, reflecting the 24-hour fresh fish mantra: “from the boat to your plate within 24 hours” —following the same usual trade of the local fishermen but in a digitalized version.

“But what if dayaon (dupe)? Claiming it’s fresh even though it’s not,” Engr Pascua said in an interview with WhatALife! “… [so] we created a mechanism where consumers can track fishermen and determine when the fish was caught, who caught it, and if it’s sustainable.”

Together with his team, Engr Pascua aims not just to empower local fishers, but also to let the consumers participate in conserving the fishery industry by educating them and being conscious of sustainable fishing.

“The only way to sustain the fishery is to get what we only consume,” Engr Pascua said.

Tapping into municipal fisherfolks would be easier than going after commercial fisheries, which would be more challenging. Municipal fisherfolk are more sustainable to the vision since they can only fish what they can fit in their boats, avoiding overfishing.

As a startup, Fishbee became part of the top 15 startups in the 2021 acceleration of IdeaSpace Philippines and among the top innovators of the UpLink Ocean’s Blue Food Challenge 2021.

How does it work?

Fishbee in the pipeline considers having their own Fishbee fishermen to cater to demand as it grows. Upon docking, aggregators will then check for quality control and placement of the scannable tracking stickers containing when, where, and who caught the fish before uploading it on their online marketplace.

Currently, its platform is still going through development. In the meantime, Fishbee utilizes Facebook as a marketplace to reach consumers in nearby areas (within El Salvador and mostly in the first district of Cagayan de Oro).

If you’re interested in trying out their fresh local catch, Fishbee caters to delivery services every Wednesday and Saturday for now. Make sure to reach them out via Facebook or call/text 0926 333 5189 to inquire about the catch of the day and reservation. – WhatALife.ph

This 2021, WhatALife! takes on the initiative to feature different Kagay-anon SMEs to support and help promote local products. Check out here for more SME Featured stories!