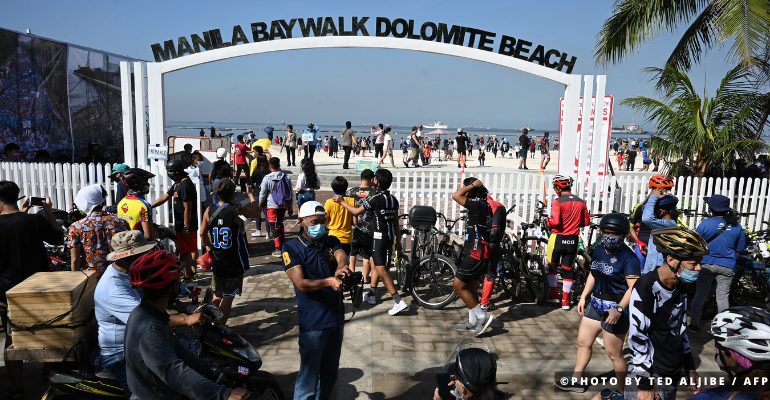 Manila Bay’s so-called dolomite beach has reopened its shores to the public over the weekend following the ease of quarantine restrictions in the capital under Alert Level 3.

On Sunday, the Department of Environment and Natural Resources (DENR) reported that the rehabilitated bay received a “strong public reception.”

'Cimatu said aside from promoting positive mental health, the dolomite beach project also serves as another location for viewing the scenic Manila Bay sunset along the Baywalk.'

“We are overwhelmed by the outpouring of support from the public, which made the reopening of the Manila Bay Dolomite Beach successful,” Environment Secretary Roy Cimatu said.

Despite the influx, Climatu said that health and safety protocols were still strictly observed by the visitors, assuring that DENR personnel and security marshals are manning the area.

In addition, Climatu said there is no need for people to be vaccinated to enter the premises, but wearing a face mask is mandatory while using a face shield is optional.

Visitors are also not allowed to bring food, drinks, and pets, as well as picking up dolomite sand, spit, and litter in the area.

Check out below some of the netizen’s mixed reactions regarding the reopening of the dolomite beach.

An American follower on Instagram asked me why’re the people on Dolomite beach are fully clothed. I had to explain to him that this in an artificial and no swimming beach made in a middle of a pandemic. It’s pretty absurd if you look at it from the outside. M E N T A L ✨ pic.twitter.com/S1azurYQgD

Another example of induced demand, I guess. ?‍♂️ https://t.co/PHL3VDlb4k

Filipinos and their Dolomite Beach pic.twitter.com/wUI8TEIFdq

We were making fun on people flocking on the dolomite beach opening but this is actually a sad reflection of how much we have been dealing against superficial government programs under a pseudoscientific sense of environmental rehabilitation and restoration. #SaveManilaBay https://t.co/XKd25kAmwq

Last year, the government overlaid mounds of artificial white sand partly over Manila bay’s naturally gray shoreline. Despite the criticisms it received from some sectors and the public, the project ensued and has been maintained to retain its “white sand” and cleanliness in the area. – WhatALife.ph