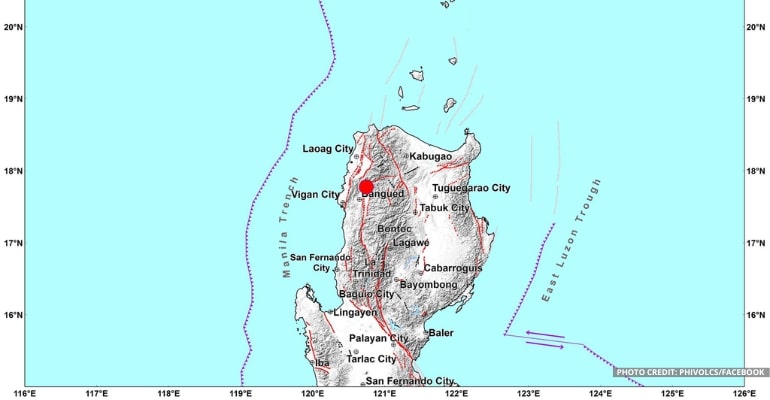 MANILA, PHILIPPINES — On October 25, Tuesday, a magnitude 6.4 earthquake rocked Abra in the evening, according to the Philippine Institute of Volcanology and Seismology (Phivolcs).

Phivolcs reported that the earthquake epicenter was 33 km northwest of Lagayan, Abra, and at 10:59 p.m. It recorded an 11 km depth of focus. The quake was tectonic in origin.

The magnitude was initially logged at magnitude 6.7, but Phivolcs released an updated advisory on October 26, Wednesday, at 12:40 a.m. They reduced the intensity to a magnitude of 6.4.

Phivolcs added that an aftershock was recorded at magnitude 3.1 in Lagayan town at 11:12 p.m.

The agency expected damage to structures; it also warned the public to remain wary of aftershocks. Phivolcs senior science research specialist Charm Villamil said that any expected damage was based on recorded intensities.

“That’s expecting damage and may depend on other factors such as structural integrity of buildings, characteristics on the ground where these buildings are constructed, et cetera,” Villamil said.

Phivolcs remarked that damage is to be expected when recorded intensities reach VI and above.

Meanwhile, the agency said that although the earthquake posed no tsunami threat, earthquakes of this magnitude “may generate unusual sea level disturbances that may be observed along coasts near earthquake epicenter of Abra province.”