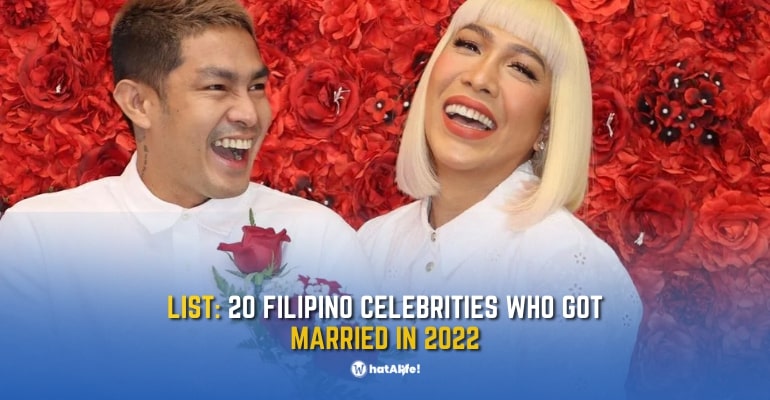 The year 2022 finally came to an end. However, it also marked the gradual return of normalcy from the pandemic lockdowns. Many celebrities took this chance to do what they had been unable to do in the last 2 years: marriage. Since weddings are best celebrated with everyone in the family, 2022 was the year to enjoy it. So here are 20 Filipino Celebrity Weddings in 2022!

Vocalist of the rock band ‘Hale,’ Champ Lui Pio married his long-time partner, Claire Nery in January 2022. The couple held their marriage ceremony at St. James the Great Parish in Alabang, with the guests being their families and closest friends.

Though she was officially married last 2021, she publicized her marriage with her husband, Dave Lamar, on Instagram last January 28, 2022. The post entailed the intimate moment they tied the knot where they kissed. The wedding was held outdoors on the Old Grove Farm Stead in Batangas.

On February 22, 2022, Geoff Eigenmann and his long-time partner, Mara Flores, held their wedding in Alabang, Muntinlupa, at Victory Christian Fellowship Church. Some prominent family members also attended the wedding, turning it into a mini-reunion.

Actress and Comedian, Wilma Doesnt married her long-time, non-showbiz partner, Gerick Parin, last March 24, 2022. Wilma described the anticipated wedding as 15 years in the making. The wedding came into motion when Gerick proposed on Wilma’s birthday last July 2021 and when they had their prenuptial photoshoot last February 2022.

Lucho Ayala, a Kapuso Actor, married his long-time partner, the Filipino-Spanish model Emma Rueda last April 2, 2022, a year after their engagement. The wedding was held in Silang, Cavite, at the Blue Moon Los Illustrados Events Place. A white-themed garden wedding was held with wisterias and gypsophila, evoking an ethereal setting.

Lindsay Custodio, a former actress and singer, married her non-showbiz partner, Frederick Cale, last May 2022 in Muntinlupa City. Four years ago, Lindsay’s late husband, Julius Ceasar Platon II, died at 43 due to a heart attack while driving on the South Luzon Expressway.

Tween Hearts star Ynna Asistio married her now husband, Waldolf “Bully” Carbonel, on August 8, 2022. A few days prior, Waldolf and Ynna got engaged, and a few days after the wedding, they announced that Ynna was pregnant with their first baby, Ava Zafina, born last October 26, 2022. The wedding was held in Alabang at Vivere Hotel and Resorts Grand Ballroom.

US-based, former Filipino actress, Donita Rose, married her partner, Felson Palad, last September 24, 2022. The wedding was held in San Clemente, California, on a private estate after the announcement of their engagement last April 2022 during the LA Fashion Week.

Serena Dalrymple was a famous child star in the ’90s and early 2000s. Although no longer working in the entertainment industry, news of her marriage with her now husband, Thomas Bredillet, made its way into the showbiz media. The two celebrated thier ceremony last October 3, 2022, in Lake Winnipesaukee, New Hampshire.

Serena graduated with a master’s degree in international business at London’s Hult International Business School and is now working as a technical program manager in New Hampshire, USA.

November 27, 2022, is a typical day for most people except for the singer-actress, Alyssa Gibbs, and her fiance, now husband, Anton Cruz. Alyssa and Anton married at The Palm House, Australia, on this special day after 5-years of engagement.

Kapamilya actress Erich Gonzales tied the knot with her businessman boyfriend, Mateo Lorenzo, last March 23, 2022. The couple got hitched at the James the Great Parish in Muntinlupa, Alabang.

Although the couple did not publicize news of their marriage, news media outlets were able to take a screenshot of the now-deleted Instagram post of Mateo’s relative.

The child star and poster child of Promil, Wyeth’s infant formula, Shaira Luna, has now grown up and made vows with her now husband, Cocoy Aranas. The exchange of vows took place at Illustrado Restaurant Ballroom inside the Intramuros in Manila last August 12, 2022.

Shaira is now a famous fashion photographer, and her wedding went viral when she flaunted her beautiful Php 100 vintage dress, proving that you don’t need an expensive wedding dress to look fabulous in your wedding.

Going Bulilit star Trina “Hopia” Legaspi and her husband, Ryan Jarina, have married once again, now in front of an altar. The couple exchanged vows in a civil setting in the previous year. However, last November 5, 2022, they once again exchanged vows in Greenmeadows, Quezon City, at the Christ the King Parish Church.

The couple was so glad that they were able to celebrate their love a second time around. Moreover, Ryan Jarina’s grandparent’s last wish was for the couple to get married in a catholic church, and they were happy to fulfill his grandparents’ wish.

Julius chose their wedding date to celebrate Hidilyn’s achievement of obtaining the very first Olympic gold medal. After the wedding ceremony, she proudly wore her Rio silver and Tokyo gold medals as part of the celebration.

Jose Marie Borja Viceral, popularly known as Vice Ganda, held a symbolic wedding last February 16, 2022, during the airing of their noontime show “Its Showtime.” Vice and Ion were already engaged since February 21, 2020, but were unsure how to proceed to be officially wedded.

Since the Philippines does not recognize same-sex marriage or union, Vice and his partner, Ion Perez, made their vows during Vice’s Las Vegas concert on October 19, 2021.

One of the wedding’s guests was Sam Conception, where they sang their 2013 hit song “Dati.” Sam and Tippy were once in a love team long before she and her husband were in a relationship.

Additionally, Roces said that the civil union is the first step to formalizing their planned wedding. As of now, family members and their closest friends are the only witnesses of this intimate moment.

Celebrities are still ordinary people. They can feel and fall in and out of love. This list shows how even when times are difficult, Filipino couples will still find a way to enjoy the company of their loved ones and prove that their love for each other is loyal and true.

Best wishes to all couples! –WhatALife!/Vaughn

Also read: Here are 20 Filipino celebrities who got married in 2021