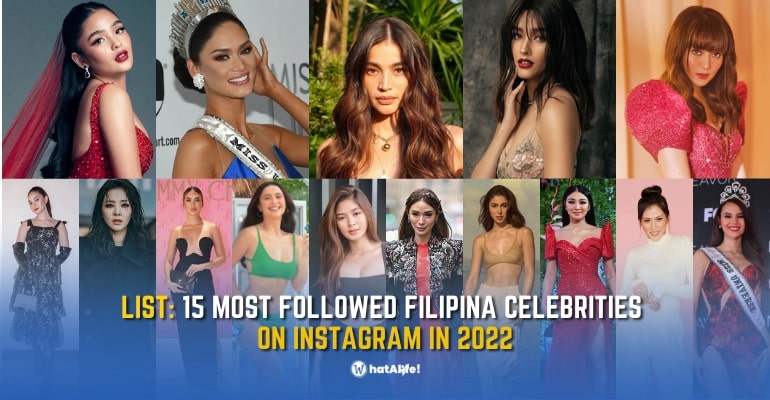 Filipinos love social media. It satiates the thirst for being up-to-date and not being left behind by the trends. With that being the case, many Filipino fans have opted to use Instagram to keep up with and support their idols in their endeavors. Here are 15 of the most followed Filipina Celebrities on Instagram in 2022, listed from bottom to top based on their number of followers.

Coleen started her career as a commercial model in many commercial endorsements. One of these commercials includes Lewis and Pearl, where she was cast alongside Enrique Gil. Her acting career started when she appeared in the anthology series “Maalaala Mo Kaya” in the “School ID” episode.

However, Sandara returned to her home country of South Korea in 2007. Afterward, she made her debut as an idol of the K-pop group 2NE1 in 2009, which became one of the best-selling girl groups before disbanding last 2016.

Actress Sofia Andres started as a commercial model for different brands, one of which is KFC. She was discovered by Egay Cueblo and was added to the hit Filipino telenovela Princess and I, where she was cast as the supporting character Dindi Maghirang, sister of the main heroine, Mikay Maghirang.

Though popularly known for her role in the longest-running Filipino teleserye, FPJ’s Ang Probinsyano, Yassi was already in show business at 11. She even appeared in Colgate’s 2001 TV commercial at the age of 6! Being cast in numerous films, she established her name in the Filipino entertainment industry.

Loisa was first seen on TV when she joined the fifth season of Pinoy Big Brother in 2014. Loisa was the last housemate evicted, which would have secured her position alongside the Big Four.

However, her talent for acting was noticed as she immediately got scouted for an upcoming teleserye as part of the main cast. Afterward, she went on to receive more prominent roles throughout her acting career up until the present.

International model, actress, and entrepreneur Heart Evangelista have garnered many fans throughout her career. So it’s no surprise that she took the 10th spot of the most followed Filipina Celebrities on Instagram since she also has a sizeable amount of fans outside the Philippines due to her modeling career.

Julia is part of the Barretto Clan, where the famous actresses Claudine and Gretchen Barretto hailed from. Acting truly runs in their blood since Julia made a name in the entertainment industry at a young age.

Singer and actress Nadine Lustre started her career as a singer under Viva Entertainment. She also dabbled in acting and received a supporting role in Petrang Kabayo as Dina.

However, that was only the start of Nadine’s film career. The breakthrough point of Nadine’s career in the film industry was when she was cast as Eya in the romantic comedy Diary ng Panget.

Catherine Cruz Gonzaga – Morada owns one of the most subscribed Youtube channels in the Philippines, with 13.1 Million subscribers. No wonder why she placed top 7 on this list! She started her acting career as part of the cast for the sitcom “Let’s Go!” and will, later on, get prominent roles in numerous films and TV shows.

In the early stages of her career, Catriona Gray was a commercial model. However, she rose to popularity after winning the Miss Universe 2018 pageant. Moreover, her quick-wittedness stood out as she answered all the questions perfectly in record time. Not to forget, her signature “lava walk” during the swimwear competition caught everyone’s eye!

The youngest one on our list, Andrew Blythe Gorostiza, was part of the children’s comedy show “Goin Bulilit.” The big break of her acting career was when she got to play the main role in “Annaliza,” a family drama series, where she portrayed Annaliza, the show’s main heroine.

Although Pia became more renowned after winning the Miss Universe 2015 pageant, she used to be an actress and even started acting at 4. Under the stage name Pia Romero. She also participated in the Star Circle Quest Batch 11 with the now-prominent artists Rayver Cruz, Nikki Gil, Paulenn Luna, and Maja Salvador.

Hailed as one of the most influential actresses in social media by Forbes Asia, it’s to be expected that she would have at least 10% of the Filipino population as her followers on Instagram!

Another rising star from the last decade, Liza Soberano, was discovered by a talent scout and was later introduced to her now talent manager, Ogie Diaz. Raised in the USA until she was 10 years old, Liza had difficulties speaking Tagalog when the talent scout found her.

Liza had her career breakthrough when she was portrayed as Maria Agnes Calay, the main character in the romantic comedy series “Forevermore.” Nowadays, she’s planning to carve her name in Hollywood by joining the cast of “Lisa Frankenstein.”

Actress, model, and self-proclaimed singer Anne Curtis-Smith is the most followed Filipina Celebrity on Instagram as of writing. Dubbed the Multimedia Superstar, she starred in numerous films in the PH. She is currently one of the main hosts of the long-running noontime variety show “It’s Showtime.”