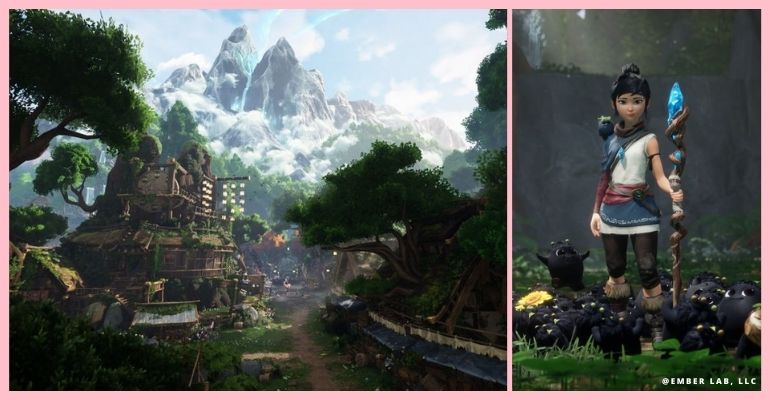 Reviews for the videogame Kena: Bridge of Spirits are out! And they’re not that bad, but they’re not exactly good either.

Kena: Bridge of Spirits is a game set in an unnamed fantasy location that looks like a blend of Japan and Bali. Many Japanese themes are present in character names and concepts. Meanwhile, a Balinese gamelan is a prominent instrument on the soundtrack. The story centers on the adventures of the titular Kena. Kena is a young girl who is the Bridge of Spirits, as she is a Spirit Guide. So, her job is to help spirits pass into the spirit world.

Alongside Kena are her companions Saiya and Beni, little kids who lost their older brother Taro. Also, part of the gang and the game’s mechanics are the Rot! Now, there’s no cause for worry here. Contrary to their name, the Rot are cute little critters that help Kena out in many ways, like moving stuff around or distracting enemies! In addition, you can even change their little hats! So here they are, in their fuzzy-headed, bright-eyed glory! Aren’t they just adorable?

Kena: Bridge of Spirits is available for the PC, PS4, and PS5. Despite that, Greg Miller, former editor for IGN, calls the game a PS2 game, “both positively and negatively.”

The game may have a cutesy Pixar-esque art style. However, it’s a game that “doesn’t reinvent the wheel.” Even so, this doesn’t mean that we should ignore this game! GameInformer says that Bridge of Spirits “stumbles a little in spots, yet confidently sprints into the heart of the adventure.”

Kena: Bridge of Spirits is Ember Labs’ very first game. Ember Labs is a 15-person game dev team that made animated commercials and game apps for brands. Additionally, the studio was founded in 2009 by Mike and Josh Grier, brothers who made the viral short Terrible Fate, based on the videogame The Legend of Zelda: Majora’s Mask. Interestingly enough, Bridge of Spirits’ art style is also likened to the Zelda series’ art style.

Also Read: Upcoming Games in 2022 for the Expectant PC Gamer