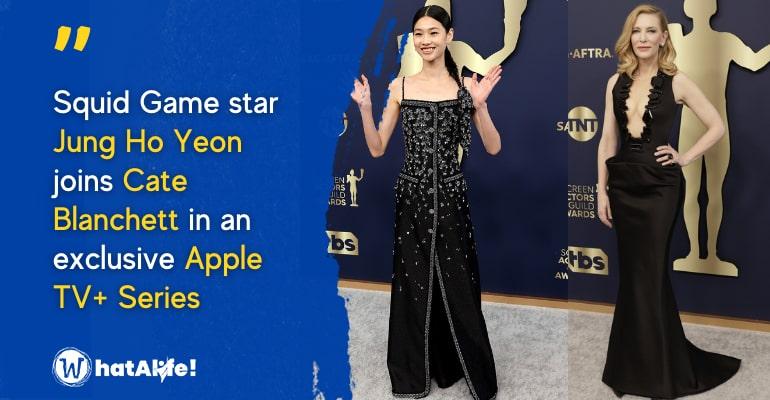 The Korean model and actress will be appearing in a new Apple TV+ series by the director, Alfonso Cuarón.

In an announcement on March 17, 2022, Jung Ho Yeon will be the latest addition to an upcoming Apple TV+ series by Alfonso Cuarón entitled Disclaimer. Yeon will be joining the well-known cast of the series, which includes Kevin Kline, Kodi Smit-McPhee, Sacha Baron Cohen, and Cate Blanchett.

Based on the novel of Renee Knight entitled the same with the series, ‘Disclaimer’ is a psychological thriller series where Cate Blanchett will star as Catherine Ravenscroft.

Blanchett will play the role of Ravenscroft as a television documentary journalist with a shocking moment when she recognizes a novel character of herself written by a widower. The writer of the novel is a role that Kevin Kline will be playing in the series.

The character in the series, Kim, is an enthusiastic, laborious, and eager-to-please young woman who believes that working for Catherine Ravenscroft will be her big break.

‘Disclaimer’ is the series that is considered Cuarón’s first project to debut from a multi-year deal as she is developing a television series that is exclusively for Apple TV+.

Emmanuel Lubezki, an Academy Award winner (Birdman, Gravity, The Revenant), and Bruno Delbonnel, an Academy Award nominee (Darkest Hour, The Tragedy of Macbeth, Inside Llewyn Davis), will be the directors of the project’s photography.

Cuarón will then be the executive producer together with Esperanto Filmoj’s Gabriela Rodriguez and Anonymous Content’s Steve Golin, Dawn Olmstead, David Levine. – WhatALife!