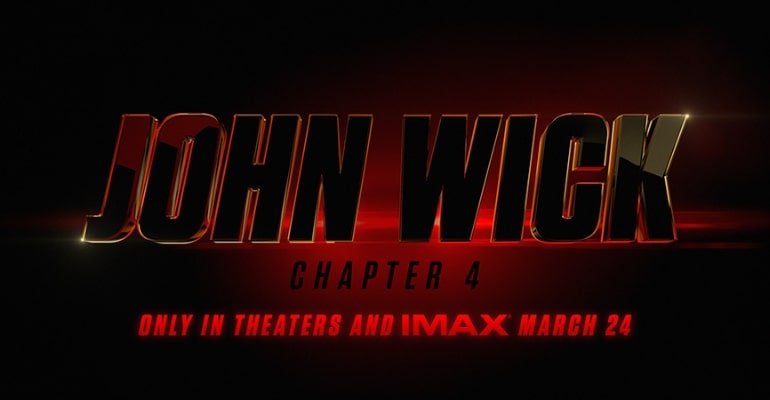 HOLYWOOD, USA — The official trailer for “John Wick: Chapter 4” has been released, once again featuring Keanu Reeves playing the Gun-Fu action hero. The new official trailer gives a better sense of what the latest franchise installment will be like.

The official synopsis reads: “John Wick (Keanu Reeves) uncovers a path to defeating the High Table. But before he can earn his freedom, Wick must face off against a new enemy with powerful alliances across the globe and forces that turn old friends into foes.”

John Wick: Chapter 4 is premiering in theaters next year on March 24, 2023. See the new trailer below:

The sneak peek premiered in July and promised more guns, sword fights, nightclubs, and dogs. The new trailer shows all that and more. It showcases even more action, and everybody is ‘Gun-Fu Fighting,’ with John Wick killing henchmen with nunchucks, axes, and lots of guns.

The new trailer also highlights Wick’s venture into the streets and museums of Paris and the sands of a desert. It gives the overarching idea that there’s only “one way out” and there is “no way back” for John Wick.

John Wick must challenge Bill Skarsgård’s character, the villain Marquis de Gramont, to single combat to win his freedom. The trailer shows him riding a horse in the desert while shooting at people, bashing a man’s head with nunchucks repeatedly, hacking a man apart with an axe in a nightclub, and engaging in a close-quarters, gun-and-sword fight with Donnie Yen’s character.

The John Wick: Chapter 4 will see Reeves reuniting with his former Matrix co-star Laurence Fishburne. The film will also see the return of Lance Reddick as Charon.

Chapter 4, longest movie in the franchise

Franchise director Chad Stahelski says that John Wick: Chapter 4 will be the longest movie in the franchise.

Stahelski, formerly a stunt performer, worked as a body double for Reeves on The Matrix trilogy. After he became a director, he directed the Ghost of Tsushima film adaptation and the Highlander reboot. The screenplay for John Wick: Chapter 4 is penned by Shay Hatten from Army of the Dead and Michael Finch from Hitman: Agent 47.

Reeves has worked with the stuntman-turned-director on the “John Wick” franchise ever since the 2014 original. The actor last played his assassin character in 2019’s “John Wick: Chapter 3 – Parabellum” and is in talks to return to the “Ballerina” spinoff starring Ana de Armas.

In August, Stahelski announced that the fourth “John Wick” installment would delve deeper into the mythology behind the Continental.

He added, “I don’t really believe — at least for the ‘John Wick’ movies — in a three-act structure. I believe in storytelling and leaving it. You know, we’ve always seen John Wick as Odysseus. So we take the time we need to tell the story. As long as we don’t fall asleep watching it, we keep it going. But I guess there is a bathroom limit.”

Next year will be a great year for the franchise because, in addition to Chapter 4, a prequel and spinoff will follow.

There is no official release date for the upcoming prequel series, The Continental, and the spinoff movie, Ballerina. Since both are well into production, a release window from 2023 to 2024 is possible.

Meanwhile, Keanu Reeves was confirmed in the cast of Ballerina, the spinoff movie led by Ana De Armas from No Time to Die. The Continental Hotel, the hotel for expert assassins, will be a part of the story.

There is a possibility that De Armas’ character and John Wick will cross paths inside the walls of the hotel. However, as its story takes place in the 70s, the Continental series is unlikely to feature the most prominent faces of the franchise. – WhatALife!/Zed