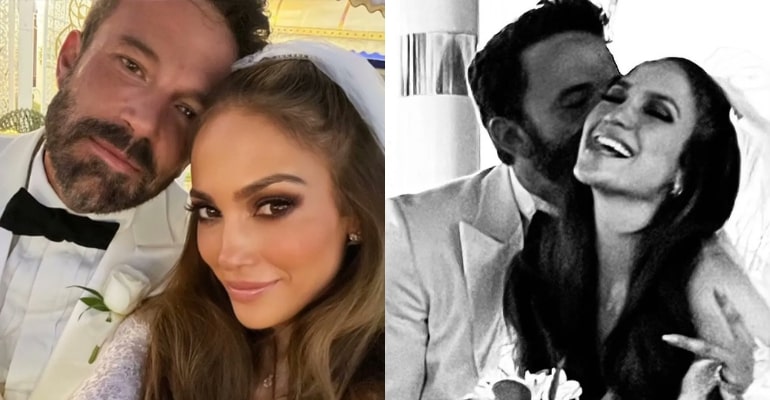 “We did it. Love is forever. Love is kind. And it turns out that love is patient. Twenty years patient,” Jennifer wrote in her official newsletter OnTheJLo.

“When love is real, the only thing that matters in marriage is one another and the promise we make to love, care, understand, be patient, loving, and good to one another. We had that. And so much more. Best night of our lives,” she added.

The two had a rollercoaster relationship in the early 2000’s when they met on the set of the movie “Gigli,” dated, engaged, scheduled, postponed, and canceled their wedding in 2003.

Despite canceling their wedding, they stayed a couple for a few months before finally calling it quits in 2004.

But around 20 years later, the couple is seen together in 2021 at the Venice International Film Festival on the red carpet for Affleck’s “The Last Duel.”

Then in April 2022, the couple got engaged again, to the surprise of many.

Three months later, the long-overdue couple walked down the aisle in a Las Vegas Nevada Chapel and had a fairly simple wedding ceremony.

“Last night we flew to Vegas, stood in line for a license with four other couples, all making the same journey to the wedding capital of the world. Behind us two men held hands and held each other. In front of us, a young couple who made the three-hour drive from Victorville on their daughter’s second birthday — all of us wanting the same thing — for the world to recognize us as partners and to declare our love to the world through the ancient and nearly universal symbol of marriage,” JLo shared on her newsletter.

The newsletter was also signed with “Mrs. Jennifer Lynn Affleck,” showing that Lopez (now Mrs. Affleck) took the name of her new husband.

From being well known as “The War and Peace” celebrity couple, to breaking up and marrying other partners, to being divorced parents to their own respective children, FINALLY, Bennifer is now Benniforever. – WhatALife!