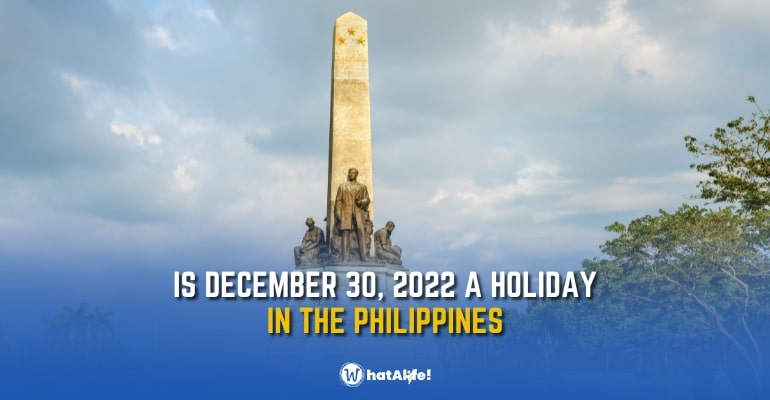 MANILA, PHILIPPINES — The last month of the year is always sure to have a couple of holidays due to the Christmas season. But, other than religion-related non-working days, there is also Rizal Day – a regular holiday set every December 30 of the year.

Rizal Day commemorates the death of the Philippine National Hero – Jose Rizal. It was first declared as a national day of mourning by former President Emilio Aguinaldo through a proclamation back in 1898.

Commemorating the life of Rizal

Born on June 16, 1861, in Calamba, Laguna, Dr. Jose Rizal was one the prominent figureheads of the Philippine Revolution against the Spanish colonizers. While he did not participate in the fighting, many historians believe that his works “Noli Me Tangere” and “El Filibusterismo,” which criticized Spanish rule, helped spark the revolution.

He was executed at Bagumbayan, Manila, in 1896. Two years later, Emilio Aguinaldo (the first president of the Philippines) declared December 30 as a day of national mourning for the deaths of Rizal and those who sacrificed their lives for the freedom of the country.

On February 1, 1902, a year after Americans took control of the Philippines following their victory against the Spanish, the Philippine Commission enacted Act No. 345, officially declaring December 30 as Rizal Day.

A monument of Rizal stands today at Luneta Park, Manila (formerly known as Bagumbayan). The Philippine Assembly approved its construction through Act No. 243 on September 28, 1901. His remains were transferred to the base of the monument in 1912, during the 17th anniversary of his death.

The monument was thought to stand at the exact spot where Rizal was shot. However, a reappraisal in the 1930s showed that the actual execution spot was a few meters off. Today, it bears a marker and a diorama stand.