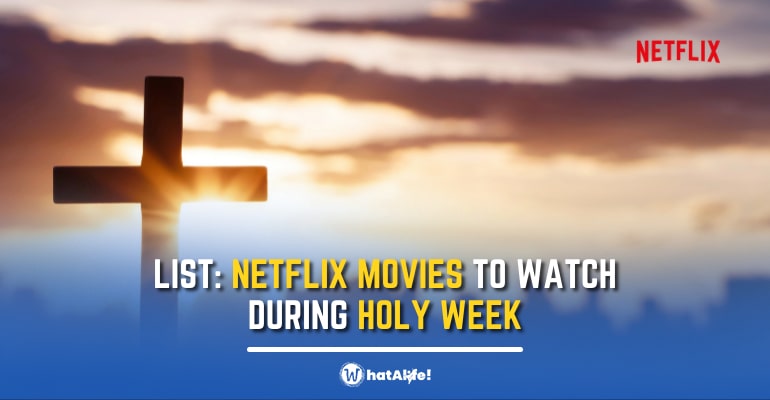 Looking for Netflix Holy Week movies in 2022? Check out this list.

Holy Week is a special time for Christians all over the world. People are celebrating Holy Week, and as a Christian nation, everyone is expected to practice and carry-on traditions observed during this week. It starts on Palm Sunday (April 10, 2022) and ends on Easter Sunday (April 17, 2022).

The best part about long weekends is that you can use the extra days to rest and relax instead of running errands or catching up on extra-curricular activities. And during Holy Week, there’s almost nothing to do but relax because stores are closed and people tend to leave the metro.

If you have nothing in mind to do during the Holy Week 2022, don’t worry, Netflix is here to keep you company. In the comfort of your homes, you can still nurture the Christian souls by watching inspiring and heartfelt Netflix holy week movies. Here are some of them:

Anna Beam (Kylie Rogers) suffers from a rare, incurable disorder that prevents her from digesting food. Despite her daughter’s dire prognosis, devoted mother Christy (Jennifer Garner) searches for a way to save her. Everything changes in an instant when Anna tells an incredible story about her visit to heaven after surviving a headlong fall into a tree. When the young girl begins to show signs of recovery from her fatal condition, her family and doctors become even more perplexed.

Blue Miracle, a Netflix holy week movie based on true life events, is a story about redeeming one’s past by serving as an example for future generations. It revolves around a guardian and his children who team up with a washed-up boat captain to win a lucrative fishing competition in order to save their cash-strapped orphanage.

Unbroken is a biography of World War II veteran Louis Zamperini, a former Olympic track star who survived a plane crash in the Pacific Theater, drifted on a raft for 47 days, and then spent more than two and a half years as a prisoner of war (POW) in three Japanese POW camps.

Behind the walls of the Vatican, Pope Benedict and the future Pope Francis must confront their respective pasts and find common ground in order to chart a new course for the Catholic Church.

WONDER, based on the New York Times bestseller, tells the incredible and heartwarming story of August Pullman. Auggie, who was born with facial differences that prevented him from attending a mainstream school until now, becomes the most unlikely of heroes when he enters the local fifth grade. Auggie’s extraordinary journey will unite them all and prove that you can’t blend in when you were born to stand out, as his family, new classmates, and the larger community all struggle to discover their compassion and acceptance.

Here’s a fun musical that the whole family will enjoy, especially the kids. Will Hawkins (Kevin Quinn) reluctantly agrees to spend a week at a Christian summer camp to help him get his life back on track. Despite his reservations, he eventually opens his heart to new people, blossoming love, and renewed faith.

Based on playwright Jonathan Larson’s autobiographical musical. It tells the story of an aspiring composer in New York City who is worried about making the wrong career choice while dealing with the pressures of love and friendship.

Noah is one of the best holy week movies out there. When God decides that mankind has become too sinful and must be wiped off the face of the Earth, he assigns a great task to Noah (Russell Crowe), a devout man. Noah must construct an ark large enough to accommodate his wife (Jennifer Connelly), adopted daughter (Emma Watson), sons (Logan Lerman, Douglas Booth, and Leo McHugh Carroll) and their wives, as well as breeding pairs of every animal. After completing the task, Noah and his family witness God’s wrath in the form of an apocalyptic flood.

Fatherhood is based on Matt Logelin’s true story, and the screenplay is based on Logelin’s 2011 memoir, Two Kisses for Maddy: A Memoir of Loss and Love. It’s a story of a man who raises his baby girl as a single father following the unexpected death of his wife, who died a day after their daughter’s birth.

Come Sunday is based on the true story of Carlton Pearson, a beloved Oklahoma bishop and favored protégé of evangelist kingmaker Oral Roberts, whose departure from the Pentacostal gospel caused a deep schism not only within his own soul, but also within his marriage and large Tulsa congregation.

Take Holy Week as an opportunity not only to rest, but to also look into yourself and meditate. Everyday life is stressful, and a few days rest is the best time to rekindle your relationship with God and yourself. And many find watching related themed movies helpful in this endeavor. – WhatALife! / Hannah