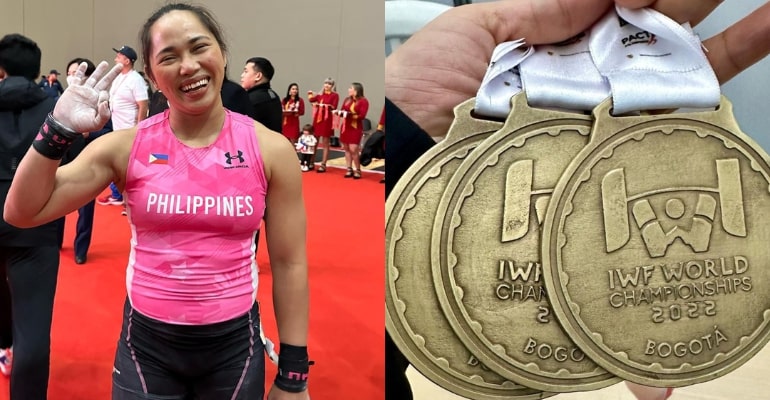 MANILA, PHILIPPINES — Hidilyn Diaz is now a world champion after bagging not one but three golds in the Weightlifting World Championships in Bogota, Colombia.

The Olympic gold medalist ruled the women’s 55kg on Thursday (Manila Time) against Rosalba Morales of Colombia and Ana Gabriela Lopez of Mexico. She won her first gold for the snatch at 93kg, followed by the clean and jerk at 114kg, and finished at the top with a total lift of 207kg.

Morales won bronze in snatch and silver in clean and jerk, with a total lift of 199kg. Meanwhile, Lopez wound up with a silver finish in snatch and third in total at 198kg.

Hidilyn’s win of three golds for snatch, clean and jerk, and the total, is motivated by her bid to qualify for the Paris 2024, her fifth Olympic appearance.

Hidilyn’s husband and coach, Julius Naranjo, went on Facebook to celebrate the addition of gold medals to Diaz’s collection.

“It’s official! We’ve kicked off our Paris 2024 Journey with a decent start and ended our year with 3 Gold medals in the Snatch/CJ/Total, going 93/114/207. Not our best showing but a historical one being the First Filipina to win a World Championships,” he wrote and added, “It’s been definitely a journey coming back, Hidilyn Diaz and I have accomplished a lot in 2022. From winning the Philippines first ever Olympics [gold] to getting married, and to winning our 2nd Southeast Asian Games Gold Medal.”

The weightlifting icon has been vying for gold in the world championships after winning silver in 2021 in the same division. In 2015 and 2017, Diaz finished with bronzes in the women’s 53kg division. Then, in 2019, she finished with another bronze in the 55kg division.

The pride of Zamboanga has been making history ever since her first win of Olympics gold, also the first for the Philippines, and now being the first Filipina to win a World Championships.