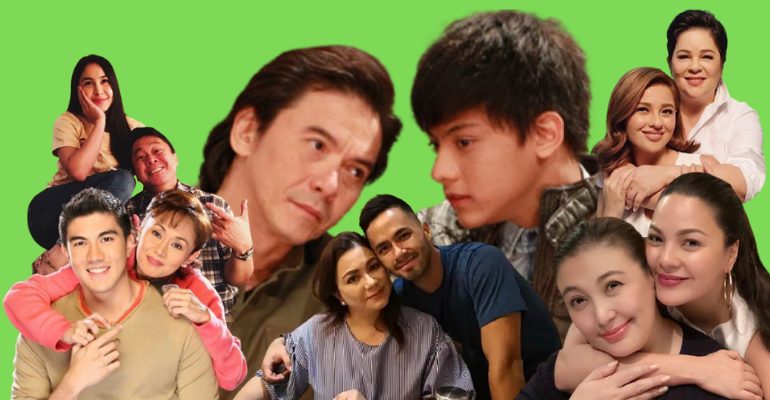 Seems like everyone loves a good family dynamic, especially in the local Tinseltown. Most kids of celebrity parents get exposed to the showbiz industry at a young age and can be the main influence on their decision to follow in their parents’ footsteps. Here are some of the local celebrity parents and their children.

The Gutierrez family is definitely among the most well-known showbiz families in the country. Eddie Gutierrez started his acting career in 1955 and has starred in over a hundred films over the years. His wife, Annabelle Rama, moved from Cebu to Manila to become an actress in her own right. They got married in 1980 and had six kids, three of them now celebrities: Ruffa and twins Richard and Raymond Gutierrez.

Ruffa is a model, actress, and former beauty queen. She was part of That’s Entertainment as a host and would continue to appear in many TV shows such as Eat Bulaga, The Buzz, and I Love Betty La Fea.

The twins, meanwhile, started as child actors, often appearing in movies with their father. But between the two of them, Richard continued on his acting career and played lead roles in GMA shows such as Mulawin, Lupin, and Zorro, to name a few.

Raymond, meanwhile, prefers hosting to acting and is best known for hosting Pinoy Idol in 2008.

The Sottos are another celebrity family whose fame has spanned decades that started with the brothers Tito, Vic, and Val. Vic Sotto would then star in many films, most notably the Enteng Kabisote franchise, and has been a long-time host of noontime show Eat Bulaga.

He was once married to award-winning actress Dina Bonnevie whose works included drama films like Magdusa Ka and Tinik sa Dibdib. When they were still together, the pair had two kids: Oyo Boy Sotto and Danica Sotto.

Oyo Boy Sotto would usually act alongside his father Vic like in the Enteng Kabisote films and sitcoms like Okey Ka, Fairy Ko.

Danica Sotto also acted during the early 90s to 2000s, most notably in teen drama Click and sitcom Daddy Di Do Du alongside her dad.

Edu Manzano, star of Palibhasa Lalaki and host of game shows Pilipinas: Game KNB and Family Feud, married Star of All Seasons Vilma Santos back in 1980. But only after two years, the couple split. These two prolific actors who also dabbled in politics only had one child together: Luis “Lucky” Manzano, the energetic TV personality.

Luis mainly did TV hosting in ASAP and music channel Myx and was one of the longest-serving VJs in said channel. He is also best known for his character Roldan in the show Komiks Presents: Flash Bomba and in the film In My Life, where he starred alongside his veteran actress mother.

One of the most famous celebrity couplings back in the 80s and 90s was Gabby Concepcion and Mega Star Sharon Cuneta. The pair appeared in many movies together like P.S. I love you and Dapat Ka Bang Mahalin, among others. They tied the knot in September of 1984. A year later, their only child together, KC Concepcion, was born. But by 1987, they had separated.

KC would then later try out being in show business. She played the lead in films For The First Time and When I Met U as well as TV shows Lovers in Paris and Huwag Ka Lang Mawawala. Like her mother, she is also a singer and has produced an album. KC also did some TV hosting for MTV Philippines, ASAP, and her own shows.

Mark Gil was widely known for the drama-suspense thriller based on real events, The Elsa Castillo Story. Before his death in September of 2014, he still appeared on the drama series The Legal Wife. Jaclyn Jose, his ex-wife, is an internationally-acclaimed actress known for her lead role in Brillante Mendoza’s Ma’ Rosa and the iconic Magda in the soap opera Mula Sa Puso.

The two veteran actors were in a relationship from 1989 to 1991 and bore one child, the beautiful Andi Eigenmann.

While she only stayed in the show business for a few years, she still had noteworthy projects like being the lead for the fantasy show Agua Bendita and being a housemate in Pinoy Big Brother: Teen Edition Plus.

The Barrettos are another celebrity family that has set their roots in local showbiz. The latest Barretto to join the family business is Julia. She’s one of the trendiest stars in today’s generation of TV personalities, garnering fame from her lead role in Mirabella and romcom films Vince and Kath and James and Love You To The Stars And Back.

Her parents are comedian-actor Dennis Padilla and actress and sister of acclaimed actress Claudine Baretto, Marjorie Barretto. Dennis was a staple in most comedy films, and he’s notably known for Kalabog en Bosyo. Marjorie Barretto has had success in film and TV with Silakbo, Campus Girls, and Spirits.

The Padilla genes are strong with Rommel Padilla and Karla Estrada’s heartthrob son Daniel Padilla. The young star clearly inherited the charm and talent of both his parents as he shot to fame with shows Princess and I and Got To Believe, both also co-starring his partner Kathryn Bernardo. Their pairing also proved to be very popular in films She’s Dating The Gangster and The Hows Of Us.

Rommel Padilla was known for his action films Totoy Golem and Kahit Demonyo Itutumba Ko. He met Karla Estrada at the office of Viva Films, where they both worked back in 1990. Karla shared in a talk show that they became a couple the day after they met. Because Rommel is a Muslim, he married Daniel’s mother and a non-showbiz woman.

Did we miss mentioning your favorite parent-child showbiz tandem? Let us know in the comments!